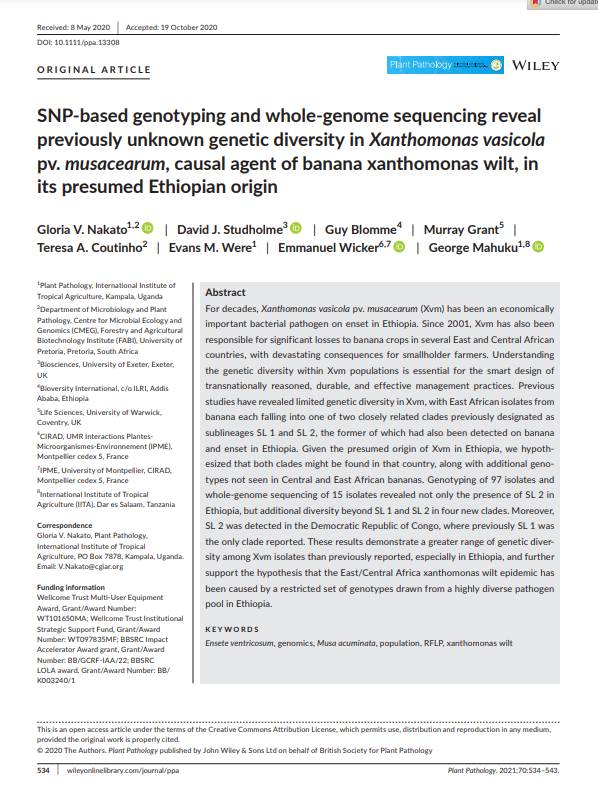 For decades, Xanthomonas vasicola pv. musacearum (Xvm) has been an economically important bacterial pathogen on enset in Ethiopia.

Since 2001, Xvm has also been responsible for significant losses to banana crops in several East and Central African countries, with devastating consequences for smallholder farmers. Understanding the genetic diversity within Xvm populations is essential for the smart design of transnationally reasoned, durable, and effective management practices. Previous studies have revealed limited genetic diversity in Xvm, with East African isolates from banana each falling into one of two closely related clades previously designated as sublineages SL 1 and SL 2, the former of which had also been detected on banana and enset in Ethiopia.

Given the presumed origin of Xvm in Ethiopia, we hypothesized that both clades might be found in that country, along with additional genotypes not seen in Central and East African bananas. Genotyping of 97 isolates and whole-genome sequencing of 15 isolates revealed not only the presence of SL 2 in Ethiopia, but additional diversity beyond SL 1 and SL 2 in four new clades. Moreover, SL 2 was detected in the Democratic Republic of Congo, where previously SL 1 was the only clade reported. These results demonstrate a greater range of genetic diversity among Xvm isolates than previously reported, especially in Ethiopia, and further support the hypothesis that the East/Central Africa xanthomonas wilt epidemic has been caused by a restricted set of genotypes drawn from a highly diverse pathogen pool in Ethiopia.