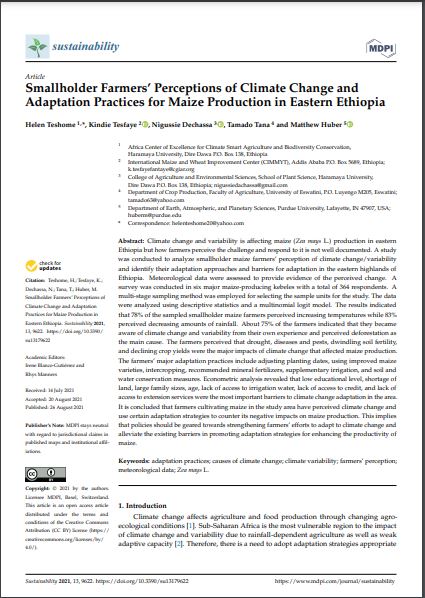 Climate change and variability is affecting maize (Zea mays L.) production in eastern Ethiopia but how farmers perceive the challenge and respond to it is not well documented. A study was conducted to analyze smallholder maize farmers’ perception of climate change/variability and identify their adaptation approaches and barriers for adaptation in the eastern highlands of Ethiopia. Meteorological data were assessed to provide evidence of the perceived change. A survey was conducted in six major maize-producing kebeles with a total of 364 respondents. A multi-stage sampling method was employed for selecting the sample units for the study. The data were analyzed using descriptive statistics and a multinomial logit model. The results indicated that 78% of the sampled smallholder maize farmers perceived increasing temperatures while 83% perceived decreasing amounts of rainfall. About 75% of the farmers indicated that they became aware of climate change and variability from their own experience and perceived deforestation as the main cause. The farmers perceived that drought, diseases and pests, dwindling soil fertility, and declining crop yields were the major impacts of climate change that affected maize production. The farmers’ major adaptation practices include adjusting planting dates, using improved maize varieties, intercropping, recommended mineral fertilizers, supplementary irrigation, and soil and water conservation measures. Econometric analysis revealed that low educational level, shortage of land, large family sizes, age, lack of access to irrigation water, lack of access to credit, and lack of access to extension services were the most important barriers to climate change adaptation in the area. It is concluded that farmers cultivating maize in the study area have perceived climate change and use certain adaptation strategies to counter its negative impacts on maize production. This implies that policies should be geared towards strengthening farmers’ efforts to adapt to climate change and alleviate the existing barriers in promoting adaptation strategies for enhancing the productivity of maize.