Small farms and development in sub-Saharan Africa: farming for food, for income or for lack of better options? 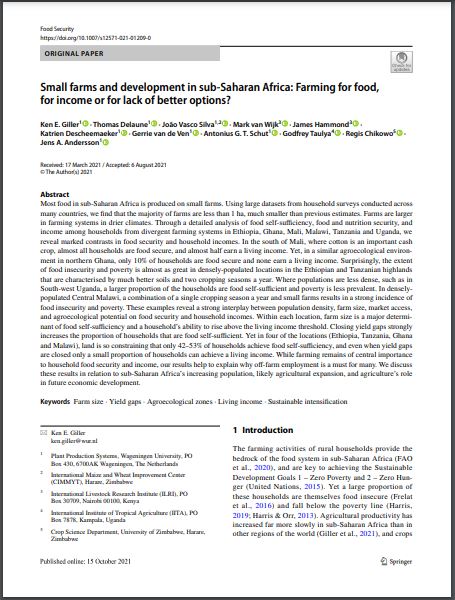 Most food in sub-Saharan Africa is produced on small farms. Using large datasets from household surveys conducted across many countries, we find that the majority of farms are less than 1 ha, much smaller than previous estimates. Farms are larger in farming systems in drier climates. Through a detailed analysis of food self-sufficiency, food and nutrition security, and income among households from divergent farming systems in Ethiopia, Ghana, Mali, Malawi, Tanzania and Uganda, we reveal marked contrasts in food security and household incomes. In the south of Mali, where cotton is an important cash crop, almost all households are food secure, and almost half earn a living income. Yet, in a similar agroecological environment in northern Ghana, only 10% of households are food secure and none earn a living income. Surprisingly, the extent of food insecurity and poverty is almost as great in densely-populated locations in the Ethiopian and Tanzanian highlands that are characterised by much better soils and two cropping seasons a year. Where populations are less dense, such as in South-west Uganda, a larger proportion of the households are food self-sufficient and poverty is less prevalent. In densely-populated Central Malawi, a combination of a single cropping season a year and small farms results in a strong incidence of food insecurity and poverty. These examples reveal a strong interplay between population density, farm size, market access, and agroecological potential on food security and household incomes. Within each location, farm size is a major determinant of food self-sufficiency and a household’s ability to rise above the living income threshold. Closing yield gaps strongly increases the proportion of households that are food self-sufficient. Yet in four of the locations (Ethiopia, Tanzania, Ghana and Malawi), land is so constraining that only 42–53% of households achieve food self-sufficiency, and even when yield gaps are closed only a small proportion of households can achieve a living income. While farming remains of central importance to household food security and income, our results help to explain why off-farm employment is a must for many. We discuss these results in relation to sub-Saharan Africa’s increasing population, likely agricultural expansion, and agriculture’s role in future economic development.