Sixty years of irrigated wheat yield increase in the Yaqui Valley of Mexico: Past drivers, prospects and sustainability 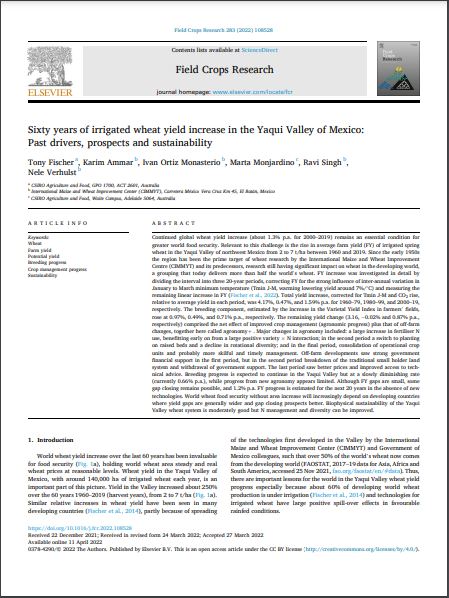 Continued global wheat yield increase (about 1.3% p.a. for 2000–2019) remains an essential condition for greater world food security. Relevant to this challenge is the rise in average farm yield (FY) of irrigated spring wheat in the Yaqui Valley of northwest Mexico from 2 to 7 t/ha between 1960 and 2019. Since the early 1950s the region has been the prime target of wheat research by the International Maize and Wheat Improvement Centre (CIMMYT) and its predecessors, research still having significant impact on wheat in the developing world, a grouping that today delivers more than half the world’s wheat. FY increase was investigated in detail by dividing the interval into three 20-year periods, correcting FY for the strong influence of inter-annual variation in January to March minimum temperature (Tmin J-M, warming lowering yield around 7%/°C) and measuring the remaining linear increase in FY (Fischer et al., 2022). Total yield increase, corrected for Tmin J-M and CO2 rise, relative to average yield in each period, was 4.17%, 0.47%, and 1.59% p.a. for 1960–79, 1980–99, and 2000–19, respectively. The breeding component, estimated by the increase in the Varietal Yield Index in farmers’ fields, rose at 0.97%, 0.49%, and 0.71% p.a., respectively. The remaining yield change (3.16, −0.02% and 0.87% p.a., respectively) comprised the net effect of improved crop management (agronomic progress) plus that of off-farm changes, together here called agronomy+. Major changes in agronomy included: a large increase in fertiliser N use, benefitting early on from a large positive variety × N interaction; in the second period a switch to planting on raised beds and a decline in rotational diversity; and in the final period, consolidation of operational crop units and probably more skilful and timely management. Off-farm developments saw strong government financial support in the first period, but in the second period breakdown of the traditional small holder land system and withdrawal of government support. The last period saw better prices and improved access to technical advice. Breeding progress is expected to continue in the Yaqui Valley but at a slowly diminishing rate (currently 0.66% p.a.), while progress from new agronomy appears limited. Although FY gaps are small, some gap closing remains possible, and 1.2% p.a. FY progress is estimated for the next 20 years in the absence of new technologies. World wheat food security without area increase will increasingly depend on developing countries where yield gaps are generally wider and gap closing prospects better. Biophysical sustainability of the Yaqui Valley wheat system is moderately good but N management and diversity can be improved.