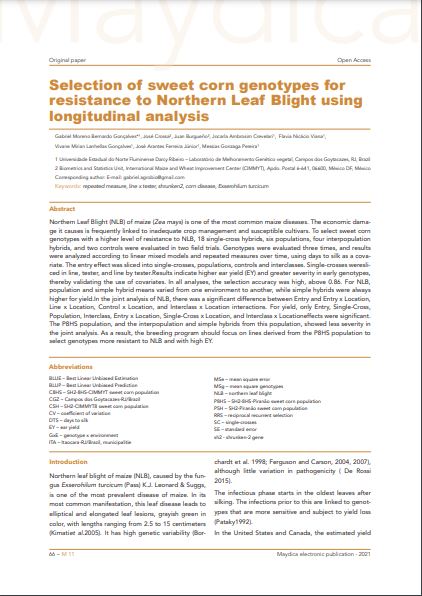 Northern Leaf Blight (NLB) of maize (Zea mays) is one of the most common maize diseases. The economic damage it causes is frequently linked to inadequate crop management and susceptible cultivars. To select sweet corn genotypes with a higher level of resistance to NLB, 18 single-cross hybrids, six populations, four interpopulation hybrids, and two controls were evaluated in two field trials. Genotypes were evaluated three times, and results were analyzed according to linear mixed models and repeated measures over time, using days to silk as a covariate. The entry effect was sliced into single-crosses, populations, controls and interclasses. Single-crosses weresliced in line, tester, and line by tester.Results indicate higher ear yield (EY) and greater severity in early genotypes, thereby validating the use of covariates. In all analyses, the selection accuracy was high, above 0.86. For NLB, population and simple hybrid means varied from one environment to another, while simple hybrids were always higher for yield.In the joint analysis of NLB, there was a significant difference between Entry and Entry x Location, Line x Location, Control x Location, and Interclass x Location interactions. For yield, only Entry, Single-Cross, Population, Interclass, Entry x Location, Single-Cross x Location, and Interclass x Locationeffects were significant. The P8HS population, and the interpopulation and simple hybrids from this population, showed less severity in the joint analysis. As a result, the breeding program should focus on lines derived from the P8HS population to select genotypes more resistant to NLB and with high EY.