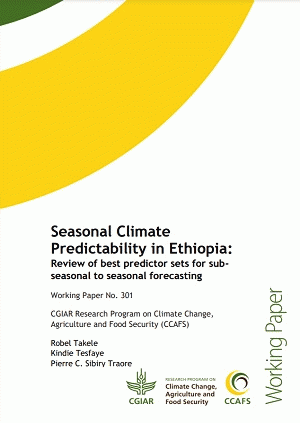 Seasonal climate predictability in Ethiopia: identifying best predictor sets for sub-seasonal to seasonal forecasting
As elsewhere in the Tropics, the climate of Ethiopia is highly variable. Capturing its variability has been a major challenge for climate models and tools. Understanding teleconnections and predictors is, therefore, an important step towards improving the skill of seasonal and intra-seasonal climate forecasts, derivative products such as seasonal yield predictions, and climate services in general. This report presents a review of existing knowledge on teleconnections, climate predictability and seasonal to intraseasonal climate forecasting advances and challenges for Ethiopia. Literature reviewed indicates an association between the seasonal climate of Ethiopia and seas surface temperature (SST) forcings over the Atlantic, Indian Oceans and, to a greater extent, over the equatorial Pacific along with associated atmospheric circulations. The main (Kiremt) season’s climate is strongly influenced by teleconnections with SST anomalies and the El Nino Southern Oscillation (ENSO) in the Nino-3.4 region of the equatorial Pacific and can yield moderate skill forecasts with 1 to 2 month lead time, while the Indian Ocean Dipole (IOD) has relatively stronger influence on the climates of the dry season (Bega) and small rains season (Belg). Best climate predictors and prediction skill therefore vary for the different seasons of Ethiopia. The procedures and methods used by the National Meteorology Agency (NMA) of Ethiopia to forecast seasonal and intraseasonal climates and their pros and cons are discussed.