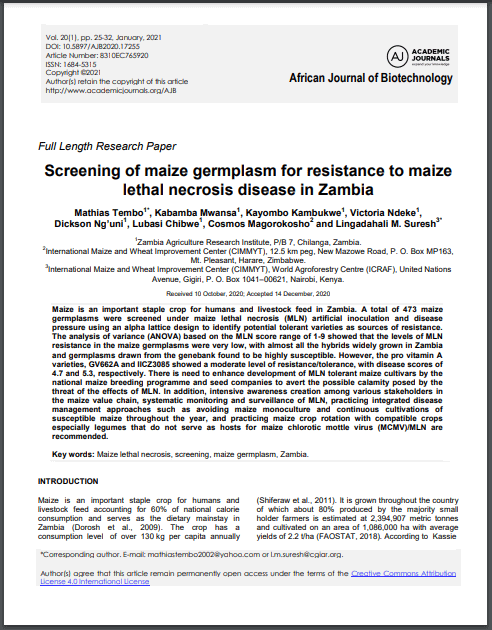 Maize is an important staple crop for humans and livestock feed in Zambia. A total of 473 maize germplasms were screened under Maize lethal necrosis (MLN) artificial inoculation and disease pressure using an alpha lattice design to identify potential tolerant varieties as sources of resistance. The analysis of variance (ANOVA) based on the MLN score range of 1-9 showed that the levels of MLN resistance in the maize germplasms were very low, with almost all the hybrids widely grown in Zambia and germplasms drawn from the genebank found to be highly susceptible. However, the pro vitamin A variety, GV662A and IICZ3085 showed a moderate level of resistance / tolerance, with disease scores of 4.7 and 5.3, respectively. There is need to enhance development of MLN tolerant maize cultivars by the national maize breeding programme and seed companies to avert the possible calamity posed by the threat of the effects of MLN. In addition, intensive awareness creation among various stakeholders in the maize value chain, systematic monitoring and surveillance of MLN, practicing integrated disease management approaches such as avoiding maize monoculture and continuous cultivations of susceptible maize throughout the year, and practicing maize crop rotation with compatible crops especially legumes that do not serve as hosts for Maize chlorotic mottle virus (MCMV)/MLN are recommended.