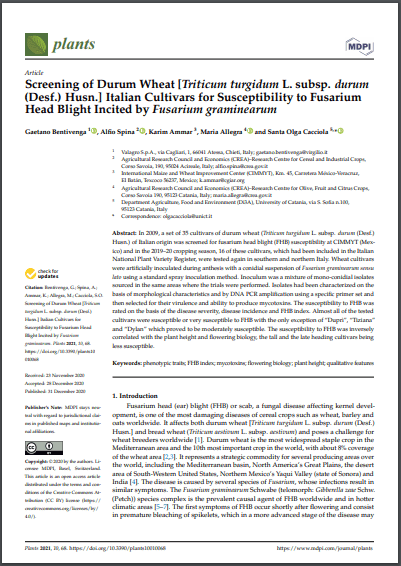 In 2009, a set of 35 cultivars of durum wheat (Triticum turgidum L. subsp. durum (Desf.) Husn.) of Italian origin was screened for fusarium head blight (FHB) susceptibility at CIMMYT (Mexico) and in the 2019–20 cropping season, 16 of these cultivars, which had been included in the Italian National Plant Variety Register, were tested again in southern and northern Italy. Wheat cultivars were artificially inoculated during anthesis with a conidial suspension of Fusarium graminearum sensu lato using a standard spray inoculation method. Inoculum was a mixture of mono-conidial isolates sourced in the same areas where the trials were performed. Isolates had been characterized on the basis of morphological characteristics and by DNA PCR amplification using a specific primer set and then selected for their virulence and ability to produce mycotoxins. The susceptibility to FHB was rated on the basis of the disease severity, disease incidence and FHB index. Almost all of the tested cultivars were susceptible or very susceptible to FHB with the only exception of “Duprì”, “Tiziana” and “Dylan” which proved to be moderately susceptible. The susceptibility to FHB was inversely correlated with the plant height and flowering biology, the tall and the late heading cultivars being less susceptible.