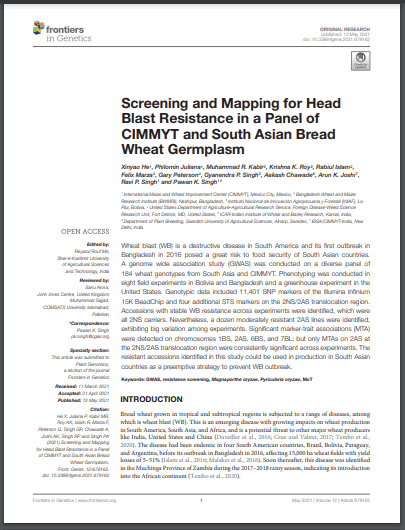 Wheat blast (WB) is a destructive disease in South America and its first outbreak in Bangladesh in 2016 posed a great risk to food security of South Asian countries. A genome wide association study (GWAS) was conducted on a diverse panel of 184 wheat genotypes from South Asia and CIMMYT. Phenotyping was conducted in eight field experiments in Bolivia and Bangladesh and a greenhouse experiment in the United States. Genotypic data included 11,401 SNP markers of the Illumina Infinium 15K BeadChip and four additional STS markers on the 2NS/2AS translocation region. Accessions with stable WB resistance across experiments were identified, which were all 2NS carriers. Nevertheless, a dozen moderately resistant 2AS lines were identified, exhibiting big variation among experiments. Significant marker-trait associations (MTA) were detected on chromosomes 1BS, 2AS, 6BS, and 7BL; but only MTAs on 2AS at the 2NS/2AS translocation region were consistently significant across experiments. The resistant accessions identified in this study could be used in production in South Asian countries as a preemptive strategy to prevent WB outbreak.