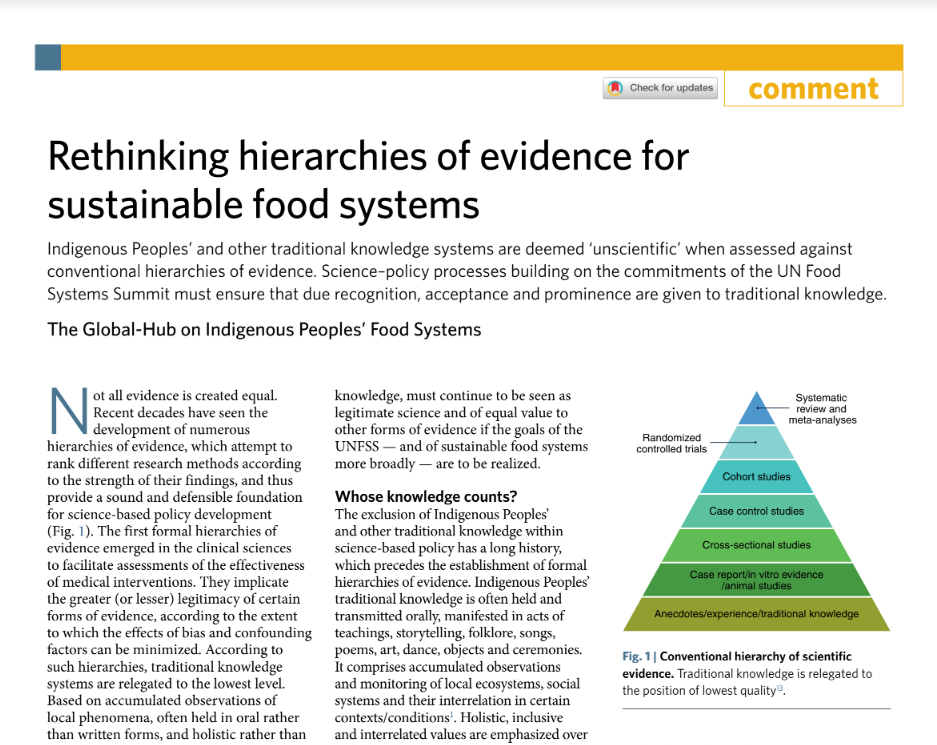 Not all evidence is created equal. Recent decades have seen the development of numerous hierarchies of evidence, which attempt to rank different research methods according to the strength of their findings, and thus provide a sound and defensible foundation for science-based policy development. The first formal hierarchies of evidence emerged in the clinical sciences to facilitate assessments of the effectiveness of medical interventions. They implicate the greater (or lesser) legitimacy of certain forms of evidence, according to the extent to which the effects of bias and confounding factors can be minimized. According to such hierarchies, traditional knowledge systems are relegated to the lowest level. Based on accumulated observations of local phenomena, often held in oral rather than written forms, and holistic rather than specialist, Indigenous Peoples’ and other traditional knowledge systems are often regarded as un- or less scientific, anecdotal, and inapplicable to and/or incapable of addressing emerging global challenges.

Despite much critique and suggested alteration over the years, conventional hierarchies of evidence have — explicitly and implicitly — become widely used in other non-clinical sectors to defend or reject policy recommendations as ‘evidence-based’. Dialogues, written outputs and scientific sessions associated with the United Nations Food Systems Summit (UNFSS) extolled the virtues of evidence-based and scientific approaches to food systems transformations and emphasized technological innovation. Positioned as the ‘People’s Summit’, valuable evidence-based contributions were made throughout the UNFSS by Indigenous Peoples’ and other traditional knowledge systems, which, despite having been practiced by millions of people across the world for millennia, continue to be marginalized in policy and practice. We propose that traditional knowledge, specifically Indigenous Peoples’ traditional knowledge, must continue to be seen as legitimate science and of equal value to other forms of evidence if the goals of the UNFSS — and of sustainable food systems more broadly — are to be realized.