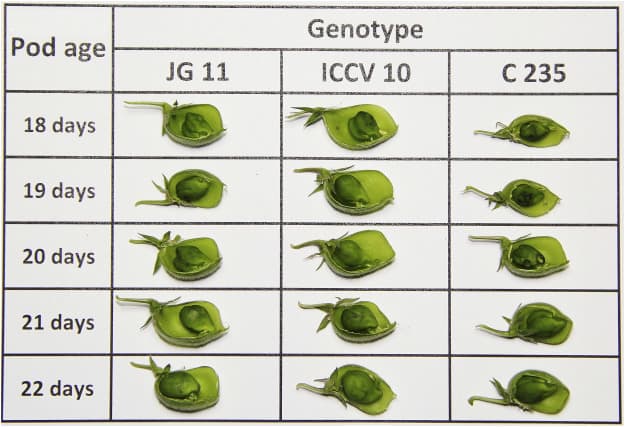 This study was aimed at developing a protocol for increasing the number of generation cycles per year in chickpea (Cicer arietinum L.). Six accessions, two each from early (JG 11 and JG 14), medium (ICCV 10 and JG 16), and late (CDC-Frontier and C 235) maturity groups, were used. The experiment was conducted for two years under glasshouse conditions. The photoperiod was extended to induce early flowering and immature seeds were germinated to further reduce generation cycle time. Compared to control, artificial light caused a reduction in flowering time by respectively 8–19, 7–16, and 11–27 days in early-, medium-, and late-maturing accessions. The earliest stage of immature seed able to germinate was 20–23 days after anthesis in accessions of different maturity groups. The time period between germination and the earliest stage of immature seed suitable for germination was considered one generation cycle and spanned respectively 43–60, 44–64, and 52–79 days in early-, medium-, and late-maturing accessions. However, the late-maturing accession CDCFrontier could not be advanced further after three generation cycles owing to the strong influence of photoperiod and temperature. The mean total number of generations produced per year were respectively 7, 6.2, and 6 in early-, medium-, and late-maturing accessions. These results have encouraging implications for breeding programs: rapid progression toward homozygosity, development of mapping populations, and reduction in time, space and resources in cultivar development (speed breeding).