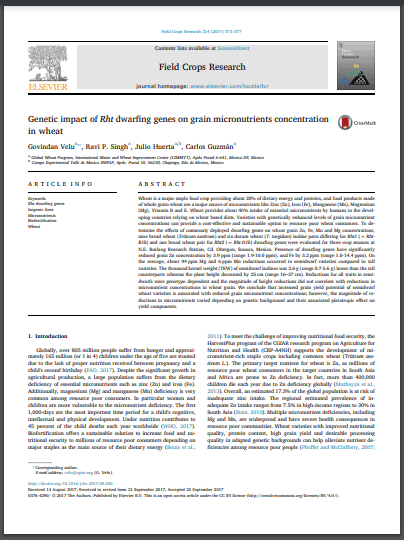 Deficiency of micronutrient elements, such as zinc (Zn) and iron (Fe), is called “hidden hunger”, and bio-fortification is the most effective way to overcome the problem. In this study, a high-density Affymetrix 50K single-nucleotide polymorphism (SNP) array was used to map quantitative trait loci (QTL) for grain Zn (GZn) and grain Fe (GFe) concentrations in 254 recombinant inbred lines (RILs) from a cross Jingdong 8/Bainong AK58 in nine environments. There was a wide range of variation in GZn and GFe concentrations among the RILs, with the largest effect contributed by the line × environment interaction, followed by line and environmental effects. The broad sense heritabilities of GZn and GFe were 0.78 and 0.79, respectively. Seven QTL for GZn on chromosomes 1DS, 2AS, 3BS, 4DS, 6AS, 6DL and 7BL accounted for 2.2-25.1% of the phenotypic variances, and four QTL for GFe on chromosomes 3BL, 4DS, 6AS and 7BL explained 2.3-30.4% of the phenotypic variances. QTL on chromosomes 4DS, 6AS and 7BL had pleiotropic effects on both GZn and GFe that were validated on a germplasm panel. Closely linked SNP markers were converted to high-throughput KASP markers, providing valuable tools for selection of improved Zn and Fe bio-fortification in breeding.