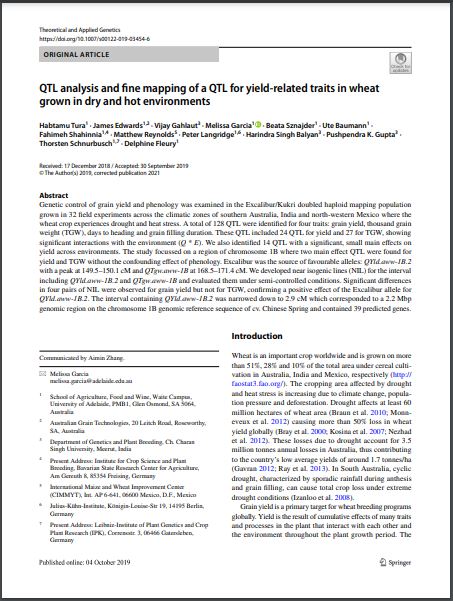 Genetic control of grain yield and phenology was examined in the Excalibur/Kukri doubled haploid mapping population grown in 32 field experiments across the climatic zones of southern Australia, India and north-western Mexico where the wheat crop experiences drought and heat stress. A total of 128 QTL were identified for four traits: grain yield, thousand grain weight (TGW), days to heading and grain filling duration. These QTL included 24 QTL for yield and 27 for TGW, showing significant interactions with the environment (Q * E). We also identified 14 QTL with a significant, small main effects on yield across environments. The study focussed on a region of chromosome 1B where two main effect QTL were found for yield and TGW without the confounding effect of phenology. Excalibur was the source of favourable alleles: QYld.aww-1B.2 with a peak at 149.5–150.1 cM and QTgw.aww-1B at 168.5–171.4 cM. We developed near isogenic lines (NIL) for the interval including QYld.aww-1B.2 and QTgw.aww-1B and evaluated them under semi-controlled conditions. Significant differences in four pairs of NIL were observed for grain yield but not for TGW, confirming a positive effect of the Excalibur allele for QYld.aww-1B.2. The interval containing QYld.aww-1B.2 was narrowed down to 2.9 cM which corresponded to a 2.2 Mbp genomic region on the chromosome 1B genomic reference sequence of cv. Chinese Spring and contained 39 predicted genes.