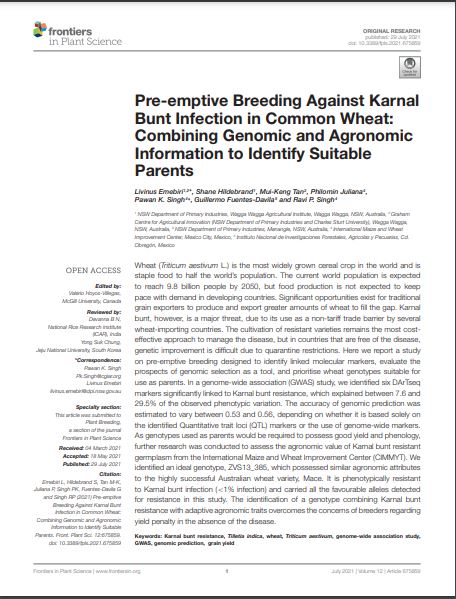 Wheat (Triticum aestivum L.) is the most widely grown cereal crop in the world and is staple food to half the world’s population. The current world population is expected to reach 9.8 billion people by 2050, but food production is not expected to keep pace with demand in developing countries. Significant opportunities exist for traditional grain exporters to produce and export greater amounts of wheat to fill the gap. Karnal bunt, however, is a major threat, due to its use as a non-tariff trade barrier by several wheat-importing countries. The cultivation of resistant varieties remains the most cost-effective approach to manage the disease, but in countries that are free of the disease, genetic improvement is difficult due to quarantine restrictions. Here we report a study on pre-emptive breeding designed to identify linked molecular markers, evaluate the prospects of genomic selection as a tool, and prioritise wheat genotypes suitable for use as parents. In a genome-wide association (GWAS) study, we identified six DArTseq markers significantly linked to Karnal bunt resistance, which explained between 7.6 and 29.5% of the observed phenotypic variation. The accuracy of genomic prediction was estimated to vary between 0.53 and 0.56, depending on whether it is based solely on the identified Quantitative trait loci (QTL) markers or the use of genome-wide markers. As genotypes used as parents would be required to possess good yield and phenology, further research was conducted to assess the agronomic value of Karnal bunt resistant germplasm from the International Maize and Wheat Improvement Center (CIMMYT). We identified an ideal genotype, ZVS13_385, which possessed similar agronomic attributes to the highly successful Australian wheat variety, Mace. It is phenotypically resistant to Karnal bunt infection (<1% infection) and carried all the favourable alleles detected for resistance in this study. The identification of a genotype combining Karnal bunt resistance with adaptive agronomic traits overcomes the concerns of breeders regarding yield penalty in the absence of the disease.