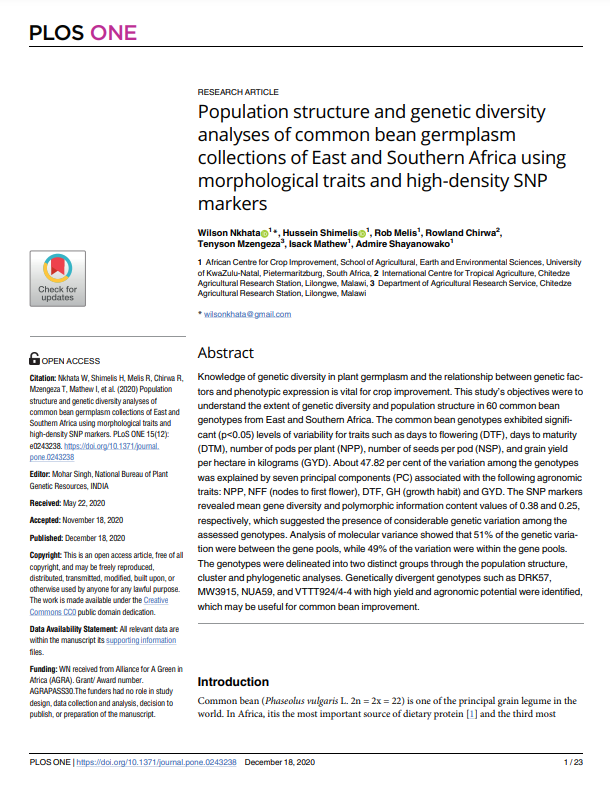 Knowledge of genetic diversity in plant germplasm and the relationship between genetic factors and phenotypic expression is vital for crop improvement. This study’s objectives were to understand the extent of genetic diversity and population structure in 60 common bean genotypes from East and Southern Africa. The common bean genotypes exhibited significant (p<0.05) levels of variability for traits such as days to flowering (DTF), days to maturity (DTM), number of pods per plant (NPP), number of seeds per pod (NSP), and grain yield per hectare in kilograms (GYD). About 47.82 per cent of the variation among the genotypes was explained by seven principal components (PC) associated with the following agronomic traits: NPP, NFF (nodes to first flower), DTF, GH (growth habit) and GYD. The SNP markers revealed mean gene diversity and polymorphic information content values of 0.38 and 0.25, respectively, which suggested the presence of considerable genetic variation among the assessed genotypes. Analysis of molecular variance showed that 51% of the genetic variation were between the gene pools, while 49% of the variation were within the gene pools. The genotypes were delineated into two distinct groups through the population structure, cluster and phylogenetic analyses. Genetically divergent genotypes such as DRK57, MW3915, NUA59, and VTTT924/4-4 with high yield and agronomic potential were identified, which may be useful for common bean improvement.