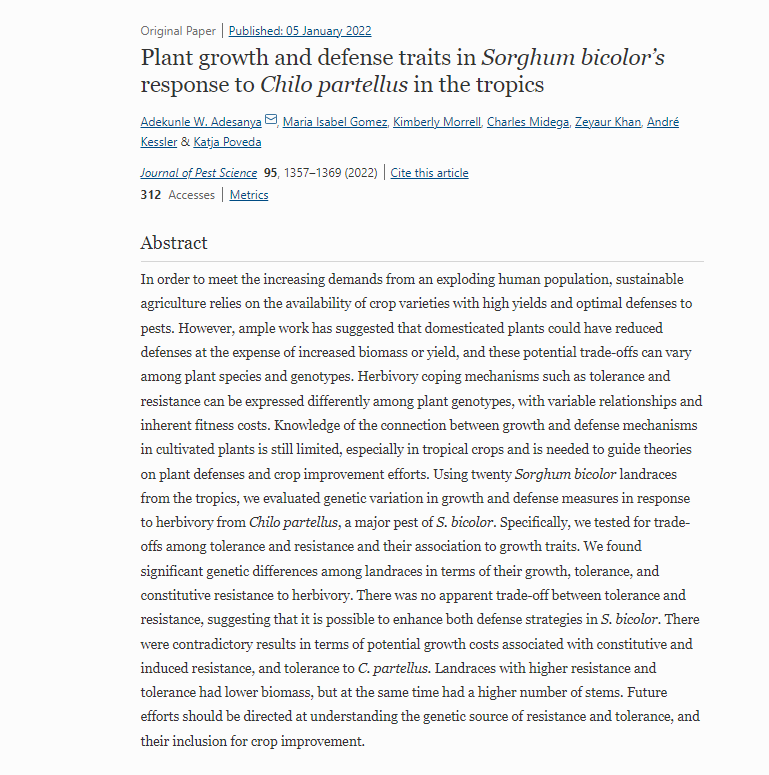 In order to meet the increasing demands from an exploding human population, sustainable agriculture relies on the availability of crop varieties with high yields and optimal defenses to pests. However, ample work has suggested that domesticated plants could have reduced defenses at the expense of increased biomass or yield, and these potential trade-offs can vary among plant species and genotypes.

Herbivory coping mechanisms such as tolerance and resistance can be expressed differently among plant genotypes, with variable relationships and inherent fitness costs. Knowledge of the connection between growth and defense mechanisms in cultivated plants is still limited, especially in tropical crops and is needed to guide theories on plant defenses and crop improvement efforts. Using twenty Sorghum bicolor landraces from the tropics, we evaluated genetic variation in growth and defense measures in response to herbivory from Chilo partellus, a major pest of S. bicolor. Specifically, we tested for trade-offs among tolerance and resistance and their association to growth traits.

We found significant genetic differences among landraces in terms of their growth, tolerance, and constitutive resistance to herbivory. There was no apparent trade-off between tolerance and resistance, suggesting that it is possible to enhance both defense strategies in S. bicolor. There were contradictory results in terms of potential growth costs associated with constitutive and induced resistance, and tolerance to C. partellus. Landraces with higher resistance and tolerance had lower biomass, but at the same time had a higher number of stems. Future efforts should be directed at understanding the genetic source of resistance and tolerance, and their inclusion for crop improvement.