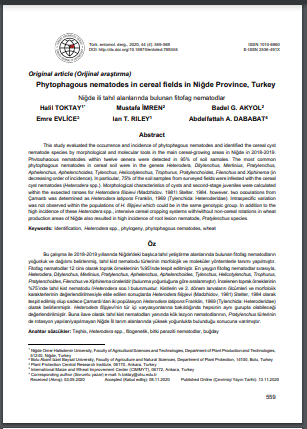 This study evaluated the occurrence and incidence of phytophagous nematodes and identified the cereal cyst nematode species by morphological and molecular tools in the main cereal-growing areas in Niğde in 2018-2019. Phytophagous nematodes within twelve genera were detected in 95% of soil samples. The most common phytophagous nematodes in cereal soil were in the genera Heterodera, Ditylenchus, Merlinius, Pratylenchus, Aphelenchus, Aphelenchoides, Tylenchus, Helicotylenchus, Trophurus, Pratylenchoides, Filenchus and Xiphinema (in decreasing order of incidence). In particular, 75% of the soil samples from surveyed fields were infested with the cereal cyst nematodes (Heterodera spp.). Morphological characteristics of cysts and second-stage juveniles were calculated within the expected ranges for Heterodera filipjevi (Madzhidov, 1981) Stelter, 1984, however, two populations from Çamardı was determined as Heterodera latipons Franklin, 1969 (Tylenchida: Heteroderidae). Intraspecific variation was not observed within the populations of H. filipjevi which could be in the same genotypic group. In addition to the high incidence of these Heterodera spp., intensive cereal cropping systems with/without non-cereal rotations in wheat production areas of Niğde also resulted in high incidence of root lesion nematode, Pratylenchus species.