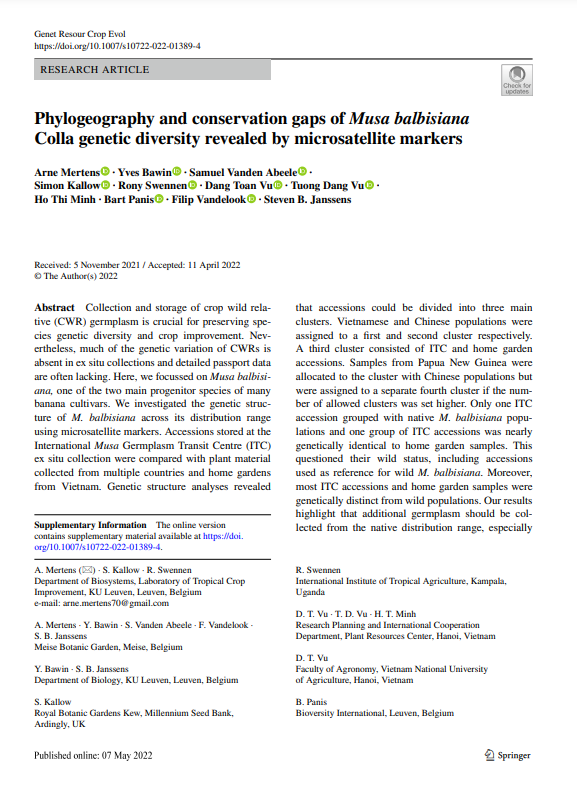 Collection and storage of crop wild relative (CWR) germplasm is crucial for preserving species genetic diversity and crop improvement. Nevertheless, much of the genetic variation of CWRs is absent in ex situ collections and detailed passport data are often lacking. Here, we focussed on Musa balbisiana, one of the two main progenitor species of many banana cultivars.

We investigated the genetic structure of M. balbisiana across its distribution range using microsatellite markers. Accessions stored at the International Musa Germplasm Transit Centre (ITC) ex situ collection were compared with plant material collected from multiple countries and home gardens from Vietnam. Genetic structure analyses revealed that accessions could be divided into three main clusters. Vietnamese and Chinese populations were assigned to a first and second cluster respectively.

A third cluster consisted of ITC and home garden accessions. Samples from Papua New Guinea were allocated to the cluster with Chinese populations but were assigned to a separate fourth cluster if the number of allowed clusters was set higher. Only one ITC accession grouped with native M. balbisiana populations and one group of ITC accessions was nearly genetically identical to home garden samples. This questioned their wild status, including accessions used as reference for wild M. balbisiana. Moreover, most ITC accessions and home garden samples were genetically distinct from wild populations. Our results highlight that additional germplasm should be collected from the native distribution range, especially from Northeast India, Myanmar, China, and the Philippines and stored for ex situ conservation at the ITC. The lack of passport data for many M. balbisiana accessions also complicates the interpretation of genetic information in relation to cultivation and historical dispersal routes.