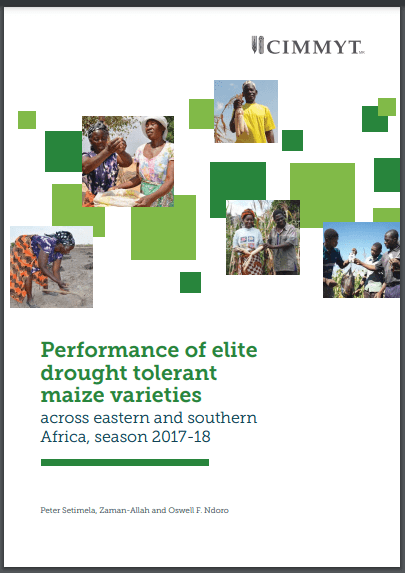 Maize (Zea mays L.) occupies more than 50% of total farmland devoted to crops in sub-Saharan Africa (SSA) (FAO, 2010). It is the main staple food crop in southern Africa, where it provides the highest caloric intake for most of the population (Smale, 1995; Smale et al., 2013). However, compared to maize yields in developed countries, maize yields in SSA remain suboptimally low at 1.5-2 t ha-1 (Vanlauwe et al., 2011). Maize is produced mostly under rainfed conditions in SSA, leading to substantial yield fluctuations from year to year due to frequent droughts and low N application (Cairns et al., 2013a; Shiferaw et al., 2011). Climate projections suggest that maize yields in SSA will decline by up to 10% by 2050 due to future climate scenarios (Tesfaye et al., 2015). Many of the current commercial varieties are susceptible to both heat and drought stress, making farmers vulnerable to food insecurity (Cairns et al., 2013a).

Before new varieties are commercialized, it is important to evaluate them under smallholders’ conditions, which are the target environments where they will be deployed. Evaluation under smallholder conditions helps breeders and agronomists measure the real genetic gains obtained through breeding (Masuka et al., 2017). To effectively deploy stress tolerant germplasm, breeders have to take into account smallholder farmers’ maize growing conditions. The objective of this study was to compare the yield performance of the new DT hybrids against the best commercial varieties under farmer management conditions that will inform the uptake and release process of new varieties that are anticipated to improve farmers crop yield.