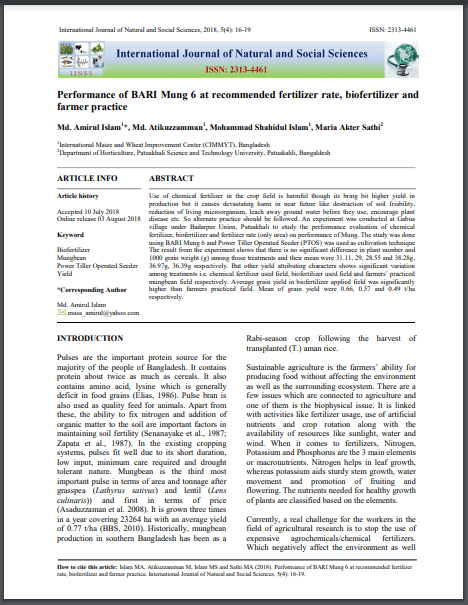 Use of chemical fertilizer in the crop field is harmful though its bring bit higher yield in production but it causes devastating harm in near future like destruction of soil friability, reduction of living microorganism, leach away ground water before they use, encourage plant disease etc. So alternate practice should be followed. An experiment was conducted at Gabua village under Badarpur Union, Patuakhali to study the performance evaluation of chemical fertilizer, biofertilizer and fertilizer rate (only urea) on performance of Mung. The study was done using BARI Mung 6 and Power Tiller Operated Seeder (PTOS) was used as cultivation technique The result from the experiment shows that there is no significant difference in plant number and 1000 grain weight (g) among those treatments and their mean were 31.11, 29, 28.55 and 38.28g, 36.97g, 36.39g respectively. But other yield attributing characters shows significant variation among treatments i.e. chemical fertilizer used field, biofertilizer used field and farmers’ practiced mungbean field respectively. Average grain yield in biofertilizer applied field was significantly higher than farmers practiced field. Mean of grain yield were 0.66, 0.57 and 0.49 t/ha respectively.