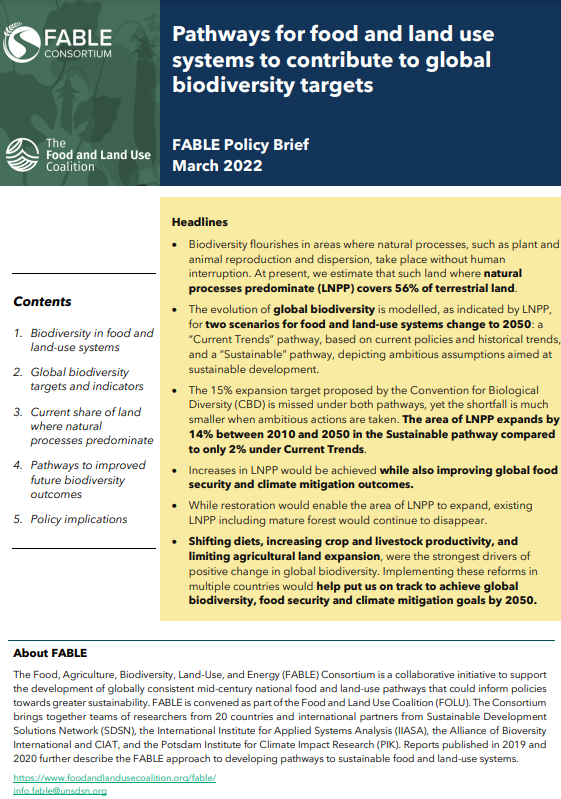 Biodiversity flourishes in areas where natural processes, such as plant and animal reproduction and dispersion, take place without human interruption. At present, we estimate that such land where natural processes predominate (LNPP) covers 56% of terrestrial land. Here, the evolution of global biodiversity is modelled, as indicated by LNPP, for two scenarios for food and land-use systems change to 2050: a “Current Trends” pathway, based on current policies and historical trends, and a “Sustainable” pathway, depicting ambitious assumptions aimed at sustainable development. The 15% expansion target proposed by the Convention for Biological Diversity (CBD) is missed under both pathways, yet the shortfall is much smaller when ambitious actions are taken. The area of LNPP expands by 14% between 2010 and 2050 in the Sustainable pathway compared to only 2% under Current Trends. Increases in LNPP would be achieved while also improving global food security and climate mitigation outcomes. While restoration would enable the area of LNPP to expand, existing LNPP including mature forest would continue to disappear. Shifting diets, increasing crop and livestock productivity, and limiting agricultural land expansion, were the strongest drivers of positive change in global biodiversity. Implementing these reforms in multiple countries would help put us on track to achieve global biodiversity, food security and climate mitigation goals by 2050.