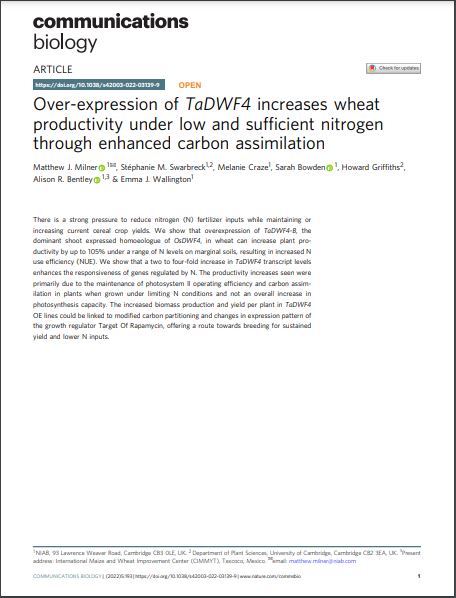 There is a strong pressure to reduce nitrogen (N) fertilizer inputs while maintaining or increasing current cereal crop yields. We show that overexpression of TaDWF4-B, the dominant shoot expressed homoeologue of OsDWF4, in wheat can increase plant productivity by up to 105% under a range of N levels on marginal soils, resulting in increased N use efficiency (NUE). We show that a two to four-fold increase in TaDWF4 transcript levels enhances the responsiveness of genes regulated by N. The productivity increases seen were primarily due to the maintenance of photosystem II operating efficiency and carbon assimilation in plants when grown under limiting N conditions and not an overall increase in photosynthesis capacity. The increased biomass production and yield per plant in TaDWF4 OE lines could be linked to modified carbon partitioning and changes in expression pattern of the growth regulator Target Of Rapamycin, offering a route towards breeding for sustained yield and lower N inputs.