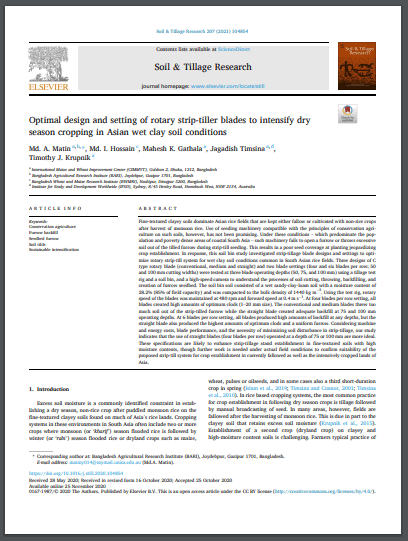 Fine-textured clayey soils dominate Asian rice fields that are kept either fallow or cultivated with non-rice crops after harvest of monsoon rice. Use of seeding machinery compatible with the principles of conservation agriculture on such soils, however, has not been promising. Under these conditions – which predominate the population and poverty dense areas of coastal South Asia – such machinery fails to open a furrow or throws excessive soil out of the tilled furrow during strip-till seeding. This results in a poor seed coverage at planting jeopardizing crop establishment. In response, this soil bin study investigated strip-tillage blade designs and settings to optimize rotary strip-till system for wet clay soil conditions common in South Asian rice fields. Three designs of C type rotary blade (conventional, medium and straight) and two blade settings (four and six blades per row; 50 and 100 mm cutting widths) were tested at three blade operating depths (50, 75, and 100 mm) using a tillage test rig and a soil bin, and a high-speed camera to understand the processes of soil cutting, throwing, backfilling, and creation of furrow seedbed. The soil bin soil consisted of a wet sandy-clay-loam soil with a moisture content of 28.2% (85% of field capacity) and was compacted to the bulk density of 1440 kg m−3. Using the test rig, rotary speed of the blades was maintained at 480 rpm and forward speed at 0.4 m s−1. At four blades per row setting, all blades created high amounts of optimum clods (1–20 mm size). The conventional and medium blades threw too much soil out of the strip-tilled furrow while the straight blade created adequate backfill at 75 and 100 mm operating depths. At 6 blades per row setting, all blades produced high amounts of backfill at any depths, but the straight blade also produced the highest amounts of optimum clods and a uniform furrow. Considering machine and energy costs, blade performance, and the necessity of minimizing soil disturbance in strip-tillage, our study indicates that the use of straight blades (four blades per row) operated at a depth of 75 or 100 mm are more ideal. These specifications are likely to enhance strip-tillage stand establishment in fine-textured soils with high moisture contents, though further work is needed under actual field conditions to confirm suitability of the proposed strip-till system for crop establishment in currently fallowed as well as the intensively cropped lands of Asia.