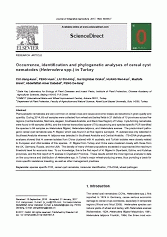 Occurrence, identification and phylogenetic analyses of cereal cyst nematodes (Heterodera spp.) in Turkey
Plant-parasitic nematodes are very common on cereal crops and cause economic losses via reductions in grain quality and quantity. During 2014, 83 soil samples were collected from wheat and barley fields in 21 districts of 13 provinces across five regions (Central Anatolia, Marmara, Aegean, Southeast Anatolia, and Black Sea Region) of Turkey. Cyst-forming nematodes were found in 66 samples (80%), and the internal transcribed spacer (ITS) sequencing and species-specific PCR identified the species in 64 samples as Heterodera filipjevi, Heterodera latipons, and Heterodera avenae. The predominant pathogenic cereal cyst nematode was H. filipjevi, which was found in all five regions surveyed. H. avenae was only detected in Southeast Anatolia whereas H. latipons was detected in Southeast Anatolia and Central Anatolia. ITS-rDNA phylogenetic analyses showed that H. avenae isolates from China clustered with H. australis, and Turkish isolates were closely related to European and USA isolates of this species. H. filipjevi from Turkey and China were clustered closely with those from the UK, Germany, Russia, and the USA. The density of many of these populations exceeded or approached the maximum threshold level for economic loss. To our knowledge, this is the first report of H. filipjevi in Diyarbakir, Edirne, and Kutahya provinces, and the first report of H. avenae in Diyarbakir Province. These results exhibit the most rigorous analysis to date on the occurrence and distribution of Heterodera spp. in Turkey’s major wheat-producing areas, thus providing a basis for more specific resistance breeding, as well as other management practices.