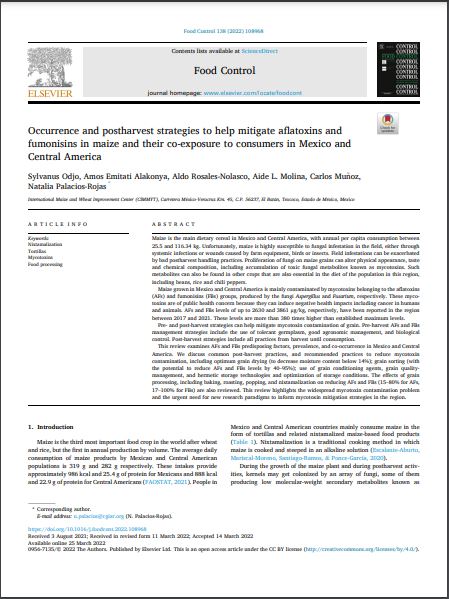 Maize is the main dietary cereal in Mexico and Central America, with annual per capita consumption between 25.5 and 116.34 kg. Unfortunately, maize is highly susceptible to fungal infestation in the field, either through systemic infections or wounds caused by farm equipment, birds or insects. Field infestations can be exacerbated by bad postharvest handling practices. Proliferation of fungi on maize grains can alter physical appearance, taste and chemical composition, including accumulation of toxic fungal metabolites known as mycotoxins. Such metabolites can also be found in other crops that are also essential in the diet of the population in this region, including beans, rice and chili peppers. Maize grown in Mexico and Central America is mainly contaminated by mycotoxins belonging to the aflatoxins (AFs) and fumonisins (FBs) groups, produced by the fungi Aspergillus and Fusarium, respectively. These mycotoxins are of public health concern because they can induce negative health impacts including cancer in humans and animals. AFs and FBs levels of up to 2630 and 3861 μg/kg, respectively, have been reported in the region between 2017 and 2021. These levels are more than 380 times higher than established maximum levels. Pre- and post-harvest strategies can help mitigate mycotoxin contamination of grain. Pre-harvest AFs and FBs management strategies include the use of tolerant germplasm, good agronomic management, and biological control. Post-harvest strategies include all practices from harvest until consumption. This review examines AFs and FBs predisposing factors, prevalence, and co-occurrence in Mexico and Central America. We discuss common post-harvest practices, and recommended practices to reduce mycotoxin contamination, including optimum grain drying (to decrease moisture content below 14%); grain sorting (with the potential to reduce AFs and FBs levels by 40–95%); use of grain conditioning agents, grain quality-management, and hermetic storage technologies and optimization of storage conditions. The effects of grain processing, including baking, roasting, popping, and nixtamalization on reducing AFs and FBs (15–80% for AFs, 17–100% for FBs) are also reviewed. This review highlights the widespread mycotoxin contamination problem and the urgent need for new research paradigms to inform mycotoxin mitigation strategies in the region.