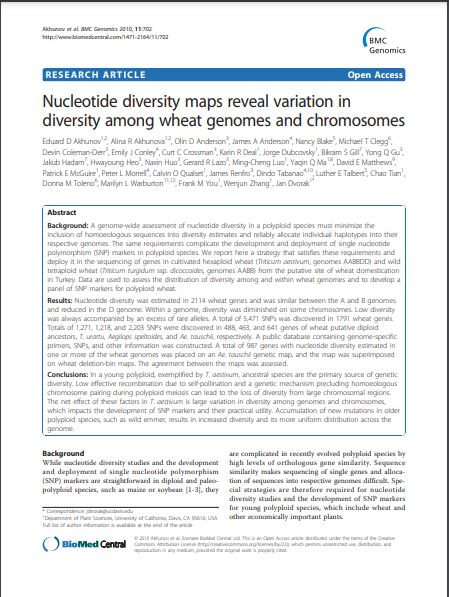 Background: A genome-wide assessment of nucleotide diversity in a polyploid species must minimize the inclusion of homoeologous sequences into diversity estimates and reliably allocate individual haplotypes into their respective genomes. The same requirements complicate the development and deployment of single nucleotide polymorphism (SNP) markers in polyploid species. We report here a strategy that satisfies these requirements and deploy it in the sequencing of genes in cultivated hexaploid wheat (Triticum aestivum, genomes AABBDD) and wild tetraploid wheat (Triticum turgidum ssp. dicoccoides, genomes AABB) from the putative site of wheat domestication in Turkey. Data are used to assess the distribution of diversity among and within wheat genomes and to develop a panel of SNP markers for polyploid wheat.Results: Nucleotide diversity was estimated in 2114 wheat genes and was similar between the A and B genomes and reduced in the D genome. Within a genome, diversity was diminished on some chromosomes. Low diversity was always accompanied by an excess of rare alleles. A total of 5,471 SNPs was discovered in 1791 wheat genes. Totals of 1,271, 1,218, and 2,203 SNPs were discovered in 488, 463, and 641 genes of wheat putative diploid ancestors, T. urartu, Aegilops speltoides, and Ae. tauschii, respectively. A public database containing genome-specific primers, SNPs, and other information was constructed. A total of 987 genes with nucleotide diversity estimated in one or more of the wheat genomes was placed on an Ae. tauschii genetic map, and the map was superimposed on wheat deletion-bin maps. The agreement between the maps was assessed.Conclusions: In a young polyploid, exemplified by T. aestivum, ancestral species are the primary source of genetic diversity. Low effective recombination due to self-pollination and a genetic mechanism precluding homoeologous chromosome pairing during polyploid meiosis can lead to the loss of diversity from large chromosomal regions. The net effect of these factors in T. aestivum is large variation in diversity among genomes and chromosomes, which impacts the development of SNP markers and their practical utility. Accumulation of new mutations in older polyploid species, such as wild emmer, results in increased diversity and its more uniform distribution across the genome.