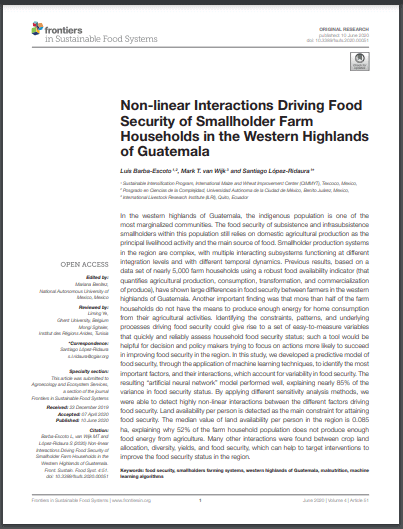 In the western highlands of Guatemala, the indigenous population is one of the most marginalized communities. The food security of subsistence and infrasubsistence smallholders within this population still relies on domestic agricultural production as the principal livelihood activity and the main source of food. Smallholder production systems in the region are complex, with multiple interacting subsystems functioning at different integration levels and with different temporal dynamics. Previous results, based on a data set of nearly 5,000 farm households using a robust food availability indicator (that quantifies agricultural production, consumption, transformation, and commercialization of produce), have shown large differences in food security between farmers in the western highlands of Guatemala. Another important finding was that more than half of the farm households do not have the means to produce enough energy for home consumption from their agricultural activities. Identifying the constraints, patterns, and underlying processes driving food security could give rise to a set of easy-to-measure variables that quickly and reliably assess household food security status; such a tool would be helpful for decision and policy makers trying to focus on actions more likely to succeed in improving food security in the region. In this study, we developed a predictive model of food security, through the application of machine learning techniques, to identify the most important factors, and their interactions, which account for variability in food security. The resulting “artificial neural network” model performed well, explaining nearly 85% of the variance in food security status. By applying different sensitivity analysis methods, we were able to detect highly non-linear interactions between the different factors driving food security. Land availability per person is detected as the main constraint for attaining food security. The median value of land availability per person in the region is 0.085 ha, explaining why 52% of the farm household population does not produce enough food energy from agriculture. Many other interactions were found between crop land allocation, diversity, yields, and food security, which can help to target interventions to improve the food security status in the region.