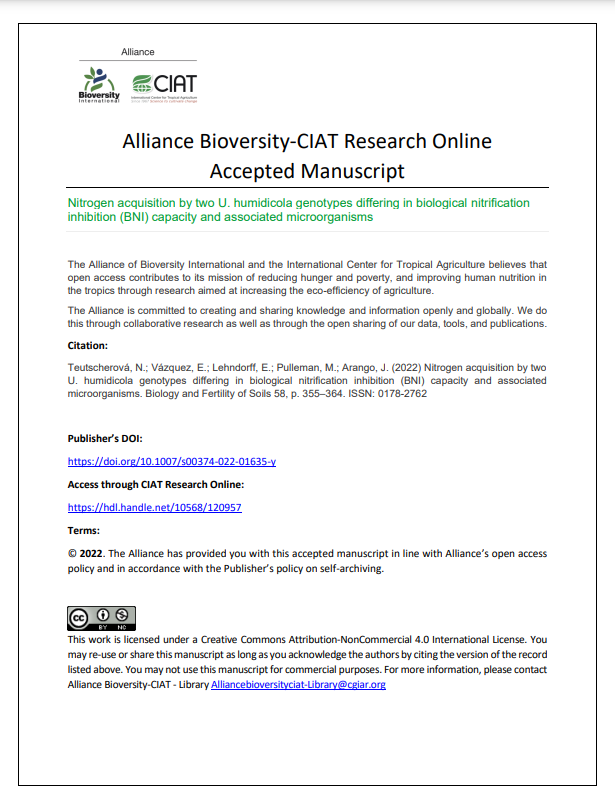 Biological nitrification inhibition (BNI) has been considered a plant strategy to increase N use efficiency by reducing N losses via N2O emissions or nitrate leaching. However, recent studies have revealed no difference in gross nitrate production among Urochloa humidicola genotypes with previously described high- and low-BNI capacity and pointed towards a crucial role for microbial N immobilization. In the current greenhouse study, we compared the 15 N acquisition by two U. humidicola genotypes (with high- and low-BNI capacity) and their soil-associated microorganisms at four points in time after fertilization (50 kg N ha−1). Soil microorganisms slightly out-competed both genotypes during the first 24 h after fertilization, and microorganisms associated with high-BNI genotype immobilized more N than microbes associated with low-BNI plants. Nevertheless, by the end of the experiment, low-BNI plant genotype had acquired more 15 N, despite higher to N2O emissions. Furthermore, higher 15 N root-to-shoot transfer was observed in low-BNI plants, potentially indicating higher contribution of nitrate to plant N uptake. In conclusion, our results confirm higher importance of microbial N immobilization in high-BNI genotypes, at least in the short-term. However, this did not result in higher N uptake by the high BNI genotype during the first 3 weeks after fertilization as could be expected. Long-term field studies are required to better understand the implications of direct (BNI sensu stricto) and indirect mechanisms (including differences in rhizosphere microbial biomass, activity and composition between high- and low-BNI genotypes), processes on plant N use efficiency, N storage in soil, and N losses to the environment.