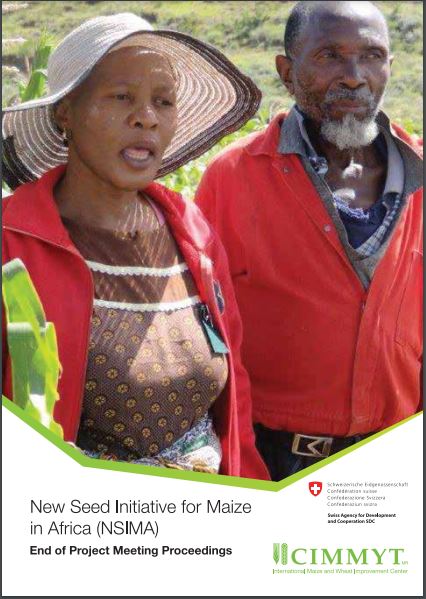 The New Seed Initiative for Maize in Africa (NSIMA) project was initiated in 2005 in recognition of the vital role that maize seed plays in agricultural development. More than half of the population in southern Africa are reliant on maize for their staple food, and yet frequent droughts, poor soil fertility, low yields, and lack of quality seed of improved, adapted and acceptable maize varieties threatens the livelihoods of many annually. Since 1985, CIMMYT has worked with key stakeholders in the region to develop improved maize varieties, stimulate the seed sector, and transfer appropriate maize production technologies to farmers. The NSIMA project was a significant contributor to this strategy. NSIMA project began with significant funding from the Swiss Agency for Development and Cooperation (SDC) and The Rockefeller Foundation. The framework for the project was formulated following a multi-stakeholder meeting among national agricultural research systems (NARS), non-governmental organizations (NGOs), the private seed sector and regional organizations, held in 2004 in Harare that sought to answer the question, “What regional collaborative activities are needed in the maize sector to improve food security and contribute to economic development in southern Africa?” The participants identified a number of constraints and determined specific objectives and activities to make a lasting response to this question. These covered the full continuum of activities from variety development, through seed systems, to empowering farmers to benefit more quickly from improved varieties, and so increase farm-level productivity and improve livelihoods. The second phase of NSIMA began in 2008, following a multi-stakeholder feedback and review workshop held in 2007, at which the participants appraised the progress of NSIMA and established the Outcome Mapping procedure for Monitoring and Evaluation of the project. This meeting also defined the Vision and Mission of NSIMA, and analyzed the Seed Value Chain in the Southern African Development Community (SADC) to identify the main actors, constraints and opportunities. From this, the participants described the principal support activities that the project might give to National Coordinating Units (NCU) to overcome constraints and take advantage of opportunities. This resulted in NSIMA giving greater attention to those aspects of the seed value chain that would deliver more seed to smallholder farmers in rural areas, particularly to register more improved varieties and stimulate activities of seed multiplication and promotion. It was realized that while good progress had been made over the course of NSIMA I and II, the vision of the project was yet to be realized, particularly since farmer adoption of the new varieties remained low in many SADC states. To further develop the NSIMA initiative beyond 2010, a small working group of NSIMA partners was held in South Africa in February, 2010, to consider how the project could be continued and modified. The participants brain-stormed the key initiatives that are considered necessary to achieve the NSIMA vision, and then examined the seed value chain to identify the roles of each of the main actors. It was indicated that increased resources needed to be allocated to seed production and promotion activities to achieve the earlier vision. NSIMA Phase III project proposal was developed and submitted to SDC. The proposal was accepted and the NSIMA-III project began in July 2011. The NSIMA-III project was as in the previous phases, one component of a matrix of initiatives of SDC to strengthen the seed sector in southern Africa for the benefit of smallholder farmers. NSIMA III worked in close collaboration with other projects in southern Africa. Such projects included the “Harmonized Seed Security Project” (HaSSP), implemented by the Food, Agriculture and Natural Resources Policy Analysis Network (FANRPAN) in four pilot countries: Malawi, Swaziland, Zambia and Zimbabwe, the “Seeds and Markets Project” (SAMP), implemented by GRM International Management Services (Pvt) Ltd (GRM) in three states-Lesotho, Swaziland and Zimbabwe. In view of the many connections and potential synergies between these three projects, close collaboration among the projects was done. The NSIMA III comes to an end on September 30th, 2015. The highlights of the project and collaborators’ activities are reported in this report. Variety testing, variety release, seed production and promotion and capacity building were carried out in the participating countries of Botswana, Democratic Republic of Congo (DR Congo), Lesotho, South Africa and Swaziland. In addition to these efforts, varieties were released in all the countries. Certified seed production was enhanced in the region, with over 1,300 tons of certified seed produced from the countries. This was made possible by early generation seed produced by individual countries themselves. Seed producing groups were established and encouraged in Swaziland, Lesotho and DR Congo. This end of project report summarizes the activities and actions taken o realize the NSIMA-III project objectives.