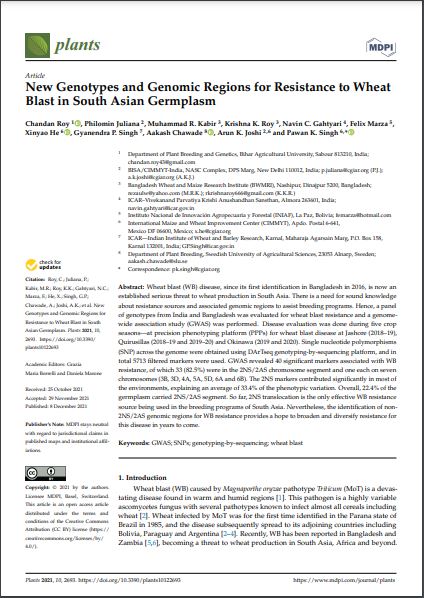 Wheat blast (WB) disease, since its first identification in Bangladesh in 2016, is now an established serious threat to wheat production in South Asia. There is a need for sound knowledge about resistance sources and associated genomic regions to assist breeding programs. Hence, a panel of genotypes from India and Bangladesh was evaluated for wheat blast resistance and a genome-wide association study (GWAS) was performed. Disease evaluation was done during five crop seasons—at precision phenotyping platform (PPPs) for wheat blast disease at Jashore (2018–19), Quirusillas (2018–19 and 2019–20) and Okinawa (2019 and 2020). Single nucleotide polymorphisms (SNP) across the genome were obtained using DArTseq genotyping-by-sequencing platform, and in total 5713 filtered markers were used. GWAS revealed 40 significant markers associated with WB resistance, of which 33 (82.5%) were in the 2NS/2AS chromosome segment and one each on seven chromosomes (3B, 3D, 4A, 5A, 5D, 6A and 6B). The 2NS markers contributed significantly in most of the environments, explaining an average of 33.4% of the phenotypic variation. Overall, 22.4% of the germplasm carried 2NS/2AS segment. So far, 2NS translocation is the only effective WB resistance source being used in the breeding programs of South Asia. Nevertheless, the identification of non-2NS/2AS genomic regions for WB resistance provides a hope to broaden and diversify resistance for this disease in years to come.