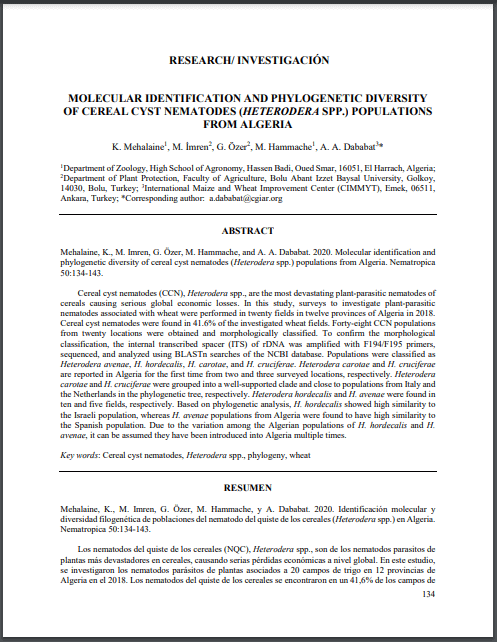 Cereal cyst nematodes (CCN), Heterodera spp., are the most devastating plant-parasitic nematodes of cereals causing serious global economic losses. In this study, surveys to investigate plant-parasitic nematodes associated with wheat were performed in twenty fields in twelve provinces of Algeria in 2018. Cereal cyst nematodes were found in 41.6% of the investigated wheat fields. Forty-eight CCN populations from twenty locations were obtained and morphologically classified. To confirm the morphological classification, the internal transcribed spacer (ITS) of rDNA was amplified with F194/F195 primers, sequenced, and analyzed using BLASTn searches of the NCBI database. Populations were classified as Heterodera avenae, H. hordecalis, H. carotae, and H. cruciferae. Heterodera carotae and H. cruciferae are reported in Algeria for the first time from two and three surveyed locations, respectively. Heterodera carotae and H. cruciferae were grouped into a well-supported clade and close to populations from Italy and the Netherlands in the phylogenetic tree, respectively. Heterodera hordecalis and H. avenae were found in ten and five fields, respectively. Based on phylogenetic analysis, H. hordecalis showed high similarity to the Israeli population, whereas H. avenae populations from Algeria were found to have high similarity to the Spanish population. Due to the variation among the Algerian populations of H. hordecalis and H. avenae, it can be assumed they have been introduced into Algeria multiple times.