Mayan traditional knowledge on weather forecasting: who contributes to whom in coping with climate change? 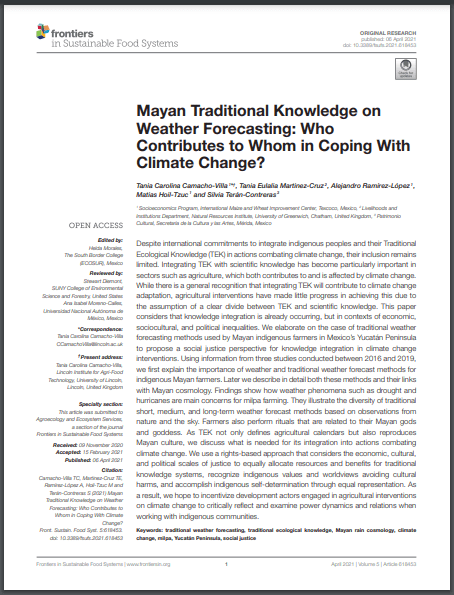 Despite international commitments to integrate indigenous peoples and their Traditional Ecological Knowledge (TEK) in actions combating climate change, their inclusion remains limited. Integrating TEK with scientific knowledge has become particularly important in sectors such as agriculture, which both contributes to and is affected by climate change. While there is a general recognition that integrating TEK will contribute to climate change adaptation, agricultural interventions have made little progress in achieving this due to the assumption of a clear divide between TEK and scientific knowledge. This paper considers that knowledge integration is already occurring, but in contexts of economic, sociocultural, and political inequalities. We elaborate on the case of traditional weather forecasting methods used by Mayan indigenous farmers in Mexico’s Yucatán Peninsula to propose a social justice perspective for knowledge integration in climate change interventions. Using information from three studies conducted between 2016 and 2019, we first explain the importance of weather and traditional weather forecast methods for indigenous Mayan farmers. Later we describe in detail both these methods and their links with Mayan cosmology. Findings show how weather phenomena such as drought and hurricanes are main concerns for milpa farming. They illustrate the diversity of traditional short, medium, and long-term weather forecast methods based on observations from nature and the sky. Farmers also perform rituals that are related to their Mayan gods and goddess. As TEK not only defines agricultural calendars but also reproduces Mayan culture, we discuss what is needed for its integration into actions combating climate change. We use a rights-based approach that considers the economic, cultural, and political scales of justice to equally allocate resources and benefits for traditional knowledge systems, recognize indigenous values and worldviews avoiding cultural harms, and accomplish indigenous self-determination through equal representation. As a result, we hope to incentivize development actors engaged in agricultural interventions on climate change to critically reflect and examine power dynamics and relations when working with indigenous communities.