Matching policy and science: Rationale for the ‘4 per 1000 - soils for food security and climate’ initiative 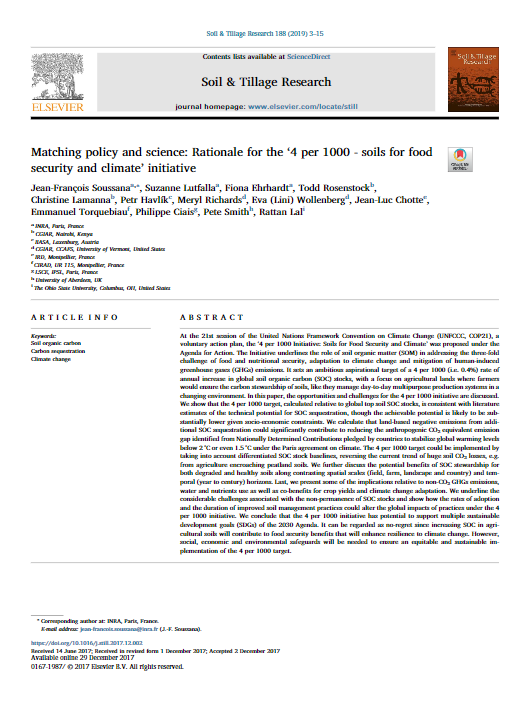 At the 21st session of the United Nations Framework Convention on Climate Change (UNFCCC, COP21), a voluntary action plan, the ‘4 per 1000 Initiative: Soils for Food Security and Climate’ was proposed under the Agenda for Action. The Initiative underlines the role of soil organic matter (SOM) in addressing the three-fold challenge of food and nutritional security, adaptation to climate change and mitigation of human-induced greenhouse gases (GHGs) emissions. It sets an ambitious aspirational target of a 4 per 1000 (i.e. 0.4%) rate of annual increase in global soil organic carbon (SOC) stocks, with a focus on agricultural lands where farmers would ensure the carbon stewardship of soils, like they manage day-to-day multipurpose production systems in a changing environment. In this paper, the opportunities and challenges for the 4 per 1000 initiative are discussed. We show that the 4 per 1000 target, calculated relative to global top soil SOC stocks, is consistent with literature estimates of the technical potential for SOC sequestration, though the achievable potential is likely to be substantially lower given socio-economic constraints. We calculate that land-based negative emissions from additional SOC sequestration could significantly contribute to reducing the anthropogenic CO2 equivalent emission gap identified from Nationally Determined Contributions pledged by countries to stabilize global warming levels below 2 °C or even 1.5 °C under the Paris agreement on climate. The 4 per 1000 target could be implemented by taking into account differentiated SOC stock baselines, reversing the current trend of huge soil CO2 losses, e.g. from agriculture encroaching peatland soils. We further discuss the potential benefits of SOC stewardship for both degraded and healthy soils along contrasting spatial scales (field, farm, landscape and country) and temporal (year to century) horizons. Last, we present some of the implications relative to non-CO2 GHGs emissions, water and nutrients use as well as co-benefits for crop yields and climate change adaptation. We underline the considerable challenges associated with the non-permanence of SOC stocks and show how the rates of adoption and the duration of improved soil management practices could alter the global impacts of practices under the 4 per 1000 initiative. We conclude that the 4 per 1000 initiative has potential to support multiple sustainable development goals (SDGs) of the 2030 Agenda. It can be regarded as no-regret since increasing SOC in agricultural soils will contribute to food security benefits that will enhance resilience to climate change. However, social, economic and environmental safeguards will be needed to ensure an equitable and sustainable implementation of the 4 per 1000 target.