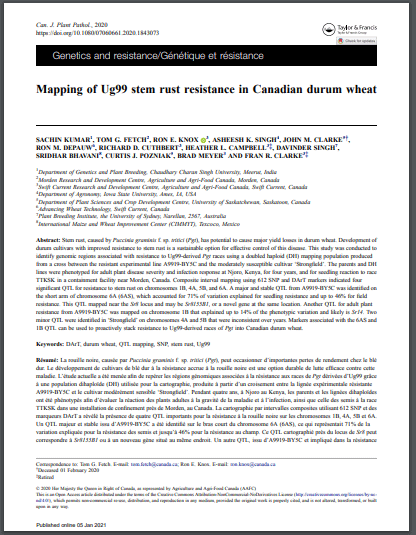 Mapping of Ug99 stem rust resistance in Canadian durum wheat
Stem rust, caused by Puccinia graminis f. sp. tritici (Pgt), has potential to cause major yield losses in durum wheat. Development of durum cultivars with improved resistance to stem rust is a sustainable option for effective control of this disease. This study was conducted to identify genomic regions associated with resistance to Ug99-derived Pgt races using a doubled haploid (DH) mapping population produced from a cross between the resistant experimental line A9919-BY5C and the moderately susceptible cultivar ‘Strongfield’. The parents and DH lines were phenotyped for adult plant disease severity and infection response at Njoro, Kenya, for four years, and for seedling reaction to race TTKSK in a containment facility near Morden, Canada. Composite interval mapping using 612 SNP and DArT markers indicated four significant QTL for resistance to stem rust on chromosomes 1B, 4A, 5B, and 6A. A major and stable QTL from A9919-BY5C was identified on the short arm of chromosome 6A (6AS), which accounted for 71% of variation explained for seedling resistance and up to 46% for field resistance. This QTL mapped near the Sr8 locus and may be Sr8155B1, or a novel gene at the same location. Another QTL for adult plant resistance from A9919-BY5C was mapped on chromosome 1B that explained up to 14% of the phenotypic variation and likely is Sr14. Two minor QTL were identified in ‘Strongfield’ on chromosomes 4A and 5B that were inconsistent over years. Markers associated with the 6AS and 1B QTL can be used to proactively stack resistance to Ug99-derived races of Pgt into Canadian durum wheat.