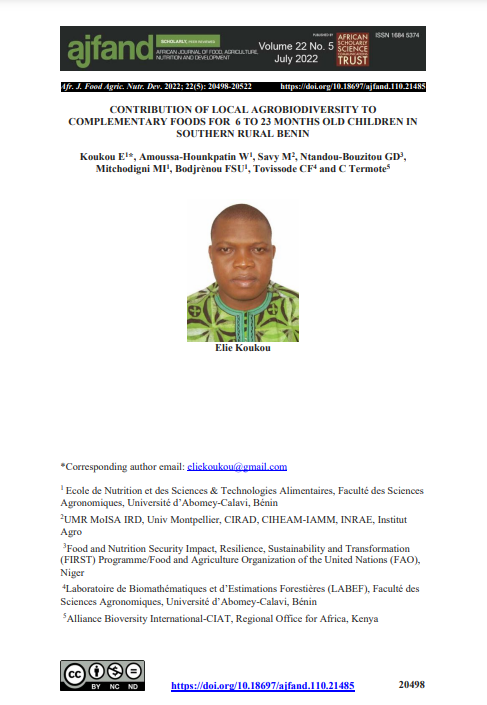 In rural Benin, malnutrition, especially micronutrient deficiencies, contrasts with a rich agrobiodiversity that abounds in cultivated or wild foods that are potential sources of micronutrients. This paradox leads us to examine the role of local agrobiodiversity in the diet of children living in two agroecological zones of southern Benin. This study involved 1,263 children aged 6-23 months from 17 randomly selected villages in Southern Benin.

A multiple-pass 24-h recall method on two non-consecutive days with the estimation of the consumed portions was used to collect dietary intake data. Semistructured questionnaires were used to collect socioeconomic and demographic data to explore factors driving agrobiodiversity food consumption, especially wild foods. Nonparametric analyses based on gamma distribution were performed to establish the effect of wild food consumption on vitamin A, calcium, iron, and zinc intakes. Conditional inference tree-classification models were performed to identify factors driving wild food consumption. Among a total of 48 local foods that were reported as consumed by children, 11 were from wild species. The contributions of total local agrobiodiversity to nutrient intake of complementary foods was between 49% (calcium) and 98% (vitamin A). Cultivated species contributed to local agrobiodiversity foods for 57% (calcium) and 96 % (zinc). The semi-domesticated species have a contribution of between 2% (zinc) and 35% (calcium) to nutrient intake. Wild species contribution to nutrient intake was between 1% (zinc) and 9% for vitamin C. Wild foods consumption correlated significantly and positively with calcium and vitamin A intakes among children. Sociolinguistic factors such as ethnicity and religion of the household head were determinants of wild food consumption. These findings suggest that sensitization on the nutritional importance of the wild foods including socio-linguistic factors may be necessary to promote wild foods’ consumption. This could be a good strategy to promote healthy diets in local communities.