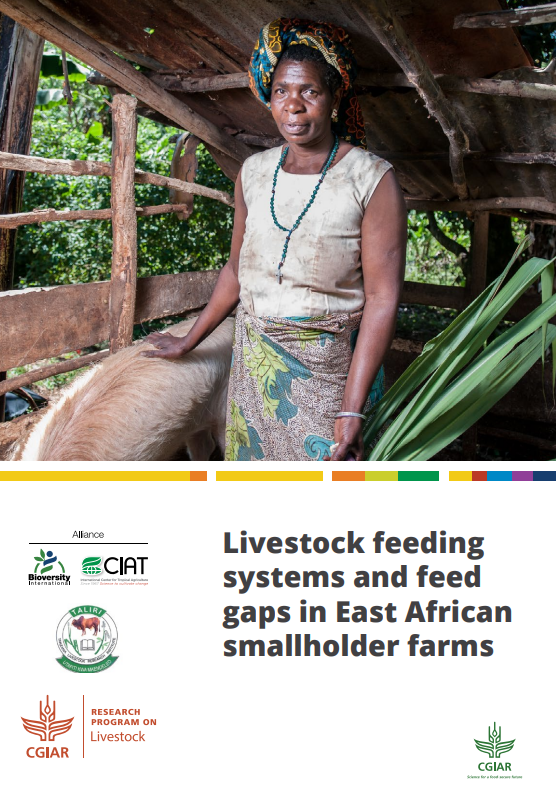 Dairy development is a promising pathway out of poverty for smallholder farmers as demand for animal-sourced foods is projected to rise. Feed is a critically limiting factor in productivity of smallholder dairy systems in East Africa. This study aims to introduce and provide proof-of-concept for a relatively simple approach to quantify feeding systems and feed gaps in data-scarce smallholder systems. Feed gap here is defined as the difference between livestock feed demand for an attainable milk production level (attainable feed demand) and actual feed supply at individual herd level. The approach is illustrated with pilot evidence from crop-livestock production systems across three agro-ecological zones in Tanzania, which broadly represent the diversity found in East Africa. Data was collected during the rainy season of 2016 and included on-farm feed and milk measurements, household surveys and farm observations. A diversity of livestock and feeding systems along an intensification gradient were found, ranging from exclusively zero-grazing of few cross-bred cows on small land sizes to mostly grazing of larger local cattle herds and a mix of both systems.

Native vegetation formed the bulk of feed resources everywhere while planted forages was only common in the cut-and-carry site. Grazing systems were more labour intensive per tropical livestock unit than cut-and-carry systems, and most feeding-related labour was provided by men. 61% of all herds faced an ME feed gap, and 55% a CP gap between actually supplied feed and calculated requirements at attainable milk production levels. Feed gaps were more prevalent in the grazing than in the cut-and-carry site, although feed losses are likely to be high (up to 30-50%) in cut-and carry systems. 24% of herds did not experience a feed gap, and other yield limiting and reducing factors might be explaining the low milk production levels. Possible causes for persisting feed gaps include that farmers might prioritize other functions of livestock such as risk management and wealth storage over productivity. The approach presented in this paper complements others that are more time, data and resource demanding. Suggestions for future improvement include capturing seasonal variability of feed gaps through repeated feed measurements across the year, and reducing output uncertainty through targeted increase of accuracy of feed supply and livestock requirement calculations. Decision-makers can use the generated insights to prioritize feeding technologies and target investments, and researchers to improve and validate modeling approaches that require detailed feed baskets.