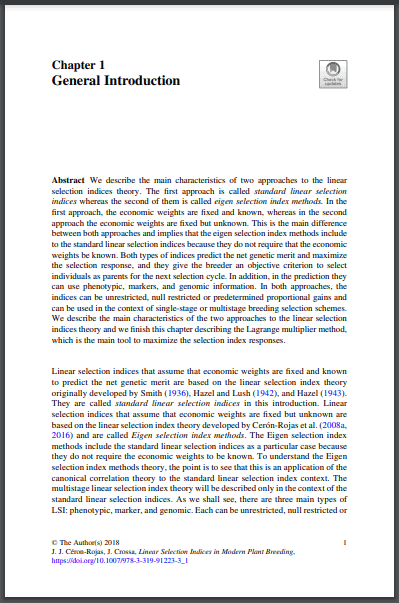 Genetic improvement programs of plants and livestock are aimed at maximizing the rate of increase of some merit function (e.g., economic value of a wheat line) that is expected to have a genetic basis. Typically, candidates for selection with the highest merit are kept as parents of the subsequent generation and those with the lowest merit are eliminated (“culled”) or used less intensively. There are at least two key questions associated with this endeavor: how merit is defined and how it is assessed. Merit can be represented by a linear or nonlinear function of genetic values for several traits regarded as important from the perspective of producing economic returns or benefits. The genetic component of merit cannot be observed; thus, it must be inferred from data on the candidates for selection, or on their relatives. Hence, and apart from the issue of specifying economic values (an area requiring expertise beyond animal and plant breeding), the problem of inferring merit is a largely statistical one. This book represents a substantial compilation of work done in an area known as “selection indices” in animal and plant breeding. Selection indices were originally developed by Smith (1936) in plant breeding and by Hazel (1943) in animal breeding to address the selection of plants or animals scored for multiple attributes. In agriculture, the breeding worth (or net genetic merit) of a candidate for selection depends on several traits.