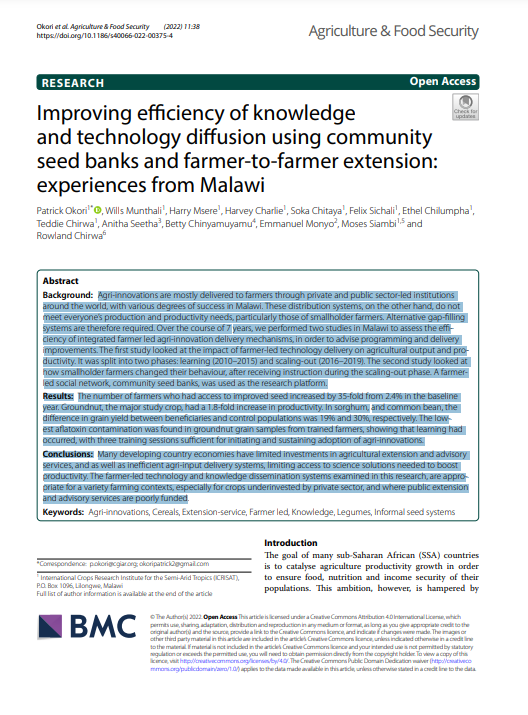 Agri-innovations are mostly delivered to farmers through private and public sector-led institutions around the world, with various degrees of success in Malawi. These distribution systems, on the other hand, do not meet everyone’s production and productivity needs, particularly those of smallholder farmers.

Alternative gap-flling systems are therefore required. Over the course of 7 years, we performed two studies in Malawi to assess the efficiency of integrated farmer led agri-innovation delivery mechanisms, in order to advise programming and delivery improvements. The first study looked at the impact of farmer-led technology delivery on agricultural output and productivity. It was split into two phases: learning (2010–2015) and scaling-out (2016–2019). The second study looked at how smallholder farmers changed their behaviour, after receiving instruction during the scaling-out phase. A farmer led social network, community seed banks, was used as the research platform.
Results: The number of farmers who had access to improved seed increased by 35-fold from 2.4% in the baseline year. Groundnut, the major study crop, had a 1.8-fold increase in productivity.

In sorghum, and common bean, the difference in grain yield between beneficiaries and control populations was 19% and 30%, respectively. The lowest afatoxin contamination was found in groundnut grain samples from trained farmers, showing that learning had occurred, with three training sessions sufficient for initiating and sustaining adoption of agri-innovations.

Conclusions: Many developing country economies have limited investments in agricultural extension and advisory services, and as well as inefficient agri-input delivery systems, limiting access to science solutions needed to boost productivity. The farmer-led technology and knowledge dissemination systems examined in this research, are appropriate for a variety farming contexts, especially for crops underinvested by private sector, and where public extension and advisory services are poorly funded.