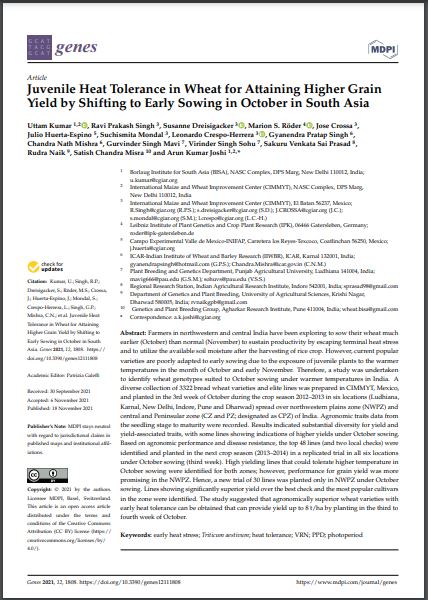 Farmers in northwestern and central India have been exploring to sow their wheat much earlier (October) than normal (November) to sustain productivity by escaping terminal heat stress and to utilize the available soil moisture after the harvesting of rice crop. However, current popular varieties are poorly adapted to early sowing due to the exposure of juvenile plants to the warmer temperatures in the month of October and early November. Therefore, a study was undertaken to identify wheat genotypes suited to October sowing under warmer temperatures in India. A diverse collection of 3322 bread wheat varieties and elite lines was prepared in CIMMYT, Mexico, and planted in the 3rd week of October during the crop season 2012–2013 in six locations (Ludhiana, Karnal, New Delhi, Indore, Pune and Dharwad) spread over northwestern plains zone (NWPZ) and central and Peninsular zone (CZ and PZ; designated as CPZ) of India. Agronomic traits data from the seedling stage to maturity were recorded. Results indicated substantial diversity for yield and yield-associated traits, with some lines showing indications of higher yields under October sowing. Based on agronomic performance and disease resistance, the top 48 lines (and two local checks) were identified and planted in the next crop season (2013–2014) in a replicated trial in all six locations under October sowing (third week). High yielding lines that could tolerate higher temperature in October sowing were identified for both zones; however, performance for grain yield was more promising in the NWPZ. Hence, a new trial of 30 lines was planted only in NWPZ under October sowing. Lines showing significantly superior yield over the best check and the most popular cultivars in the zone were identified. The study suggested that agronomically superior wheat varieties with early heat tolerance can be obtained that can provide yield up to 8 t/ha by planting in the third to fourth week of October.