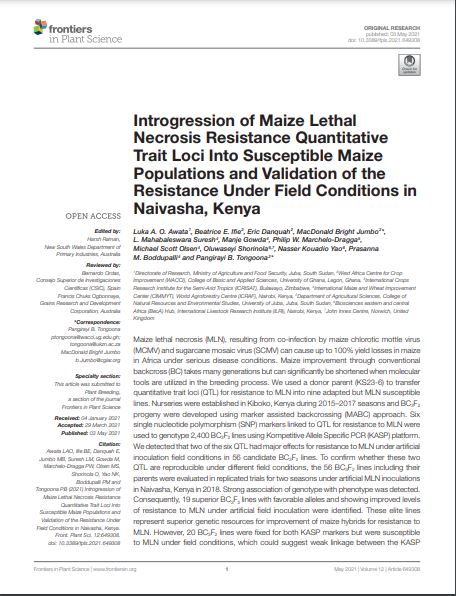 Maize lethal necrosis (MLN), resulting from co-infection by maize chlorotic mottle virus (MCMV) and sugarcane mosaic virus (SCMV) can cause up to 100% yield losses in maize in Africa under serious disease conditions. Maize improvement through conventional backcross (BC) takes many generations but can significantly be shortened when molecular tools are utilized in the breeding process. We used a donor parent (KS23-6) to transfer quantitative trait loci (QTL) for resistance to MLN into nine adapted but MLN susceptible lines. Nurseries were established in Kiboko, Kenya during 2015–2017 seasons and BC3F2 progeny were developed using marker assisted backcrossing (MABC) approach. Six single nucleotide polymorphism (SNP) markers linked to QTL for resistance to MLN were used to genotype 2,400 BC3F2 lines using Kompetitive Allele Specific PCR (KASP) platform. We detected that two of the six QTL had major effects for resistance to MLN under artificial inoculation field conditions in 56 candidate BC3F2 lines. To confirm whether these two QTL are reproducible under different field conditions, the 56 BC3F2 lines including their parents were evaluated in replicated trials for two seasons under artificial MLN inoculations in Naivasha, Kenya in 2018. Strong association of genotype with phenotype was detected. Consequently, 19 superior BC3F2 lines with favorable alleles and showing improved levels of resistance to MLN under artificial field inoculation were identified. These elite lines represent superior genetic resources for improvement of maize hybrids for resistance to MLN. However, 20 BC3F2 lines were fixed for both KASP markers but were susceptible to MLN under field conditions, which could suggest weak linkage between the KASP markers and target genes. The validated two major QTL can be utilized to speed up the breeding process but additional loci need to be identified between the KASP markers and the resistance genes to strengthen the linkage.