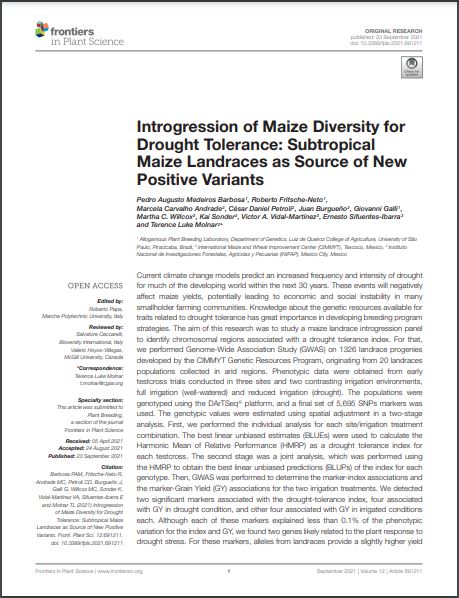 Current climate change models predict an increased frequency and intensity of drought for much of the developing world within the next 30 years. These events will negatively affect maize yields, potentially leading to economic and social instability in many smallholder farming communities. Knowledge about the genetic resources available for traits related to drought tolerance has great importance in developing breeding program strategies. The aim of this research was to study a maize landrace introgression panel to identify chromosomal regions associated with a drought tolerance index. For that, we performed Genome-Wide Association Study (GWAS) on 1326 landrace progenies developed by the CIMMYT Genetic Resources Program, originating from 20 landraces populations collected in arid regions. Phenotypic data were obtained from early testcross trials conducted in three sites and two contrasting irrigation environments, full irrigation (well-watered) and reduced irrigation (drought). The populations were genotyped using the DArTSeq® platform, and a final set of 5,695 SNPs markers was used. The genotypic values were estimated using spatial adjustment in a two-stage analysis. First, we performed the individual analysis for each site/irrigation treatment combination. The best linear unbiased estimates (BLUEs) were used to calculate the Harmonic Mean of Relative Performance (HMRP) as a drought tolerance index for each testcross. The second stage was a joint analysis, which was performed using the HMRP to obtain the best linear unbiased predictions (BLUPs) of the index for each genotype. Then, GWAS was performed to determine the marker-index associations and the marker-Grain Yield (GY) associations for the two irrigation treatments. We detected two significant markers associated with the drought-tolerance index, four associated with GY in drought condition, and other four associated with GY in irrigated conditions each. Although each of these markers explained less than 0.1% of the phenotypic variation for the index and GY, we found two genes likely related to the plant response to drought stress. For these markers, alleles from landraces provide a slightly higher yield under drought conditions. Our results indicate that the positive diversity delivered by landraces are still present on the backcrosses and this is a potential breeding strategy for improving maize for drought tolerance and for trait introgression bringing new superior allelic diversity from landraces to breeding populations.