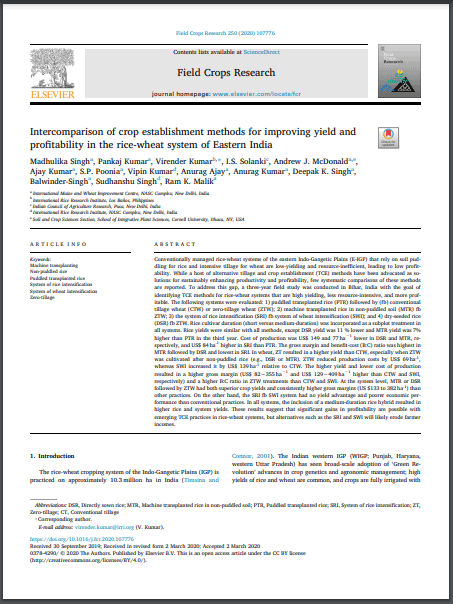 Conventionally managed rice-wheat systems of the eastern Indo-Gangetic Plains (E-IGP) that rely on soil puddling for rice and intensive tillage for wheat are low-yielding and resource-inefficient, leading to low profitability. While a host of alternative tillage and crop establishment (TCE) methods have been advocated as solutions for sustainably enhancing productivity and profitability, few systematic comparisons of these methods are reported. To address this gap, a three-year field study was conducted in Bihar, India with the goal of identifying TCE methods for rice-wheat systems that are high yielding, less resource-intensive, and more profitable. The following systems were evaluated: 1) puddled transplanted rice (PTR) followed by (fb) conventional tillage wheat (CTW) or zero-tillage wheat (ZTW); 2) machine transplanted rice in non-puddled soil (MTR) fb ZTW; 3) the system of rice intensification (SRI) fb system of wheat intensification (SWI); and 4) dry-seeded rice (DSR) fb ZTW. Rice cultivar duration (short versus medium-duration) was incorporated as a subplot treatment in all systems. Rice yields were similar with all methods, except DSR yield was 11 % lower and MTR yield was 7% higher than PTR in the third year. Cost of production was US$ 149 and 77 ha−1 lower in DSR and MTR, respectively, and US$ 84 ha-1 higher in SRI than PTR. The gross margin and benefit-cost (B:C) ratio was highest in MTR followed by DSR and lowest in SRI. In wheat, ZT resulted in a higher yield than CTW, especially when ZTW was cultivated after non-puddled rice (e.g., DSR or MTR). ZTW reduced production costs by US$ 69 ha-1, whereas SWI increased it by US$ 139 ha-1 relative to CTW. The higher yield and lower cost of production resulted in a higher gross margin (US$ 82−355 ha−1 and US$ 129−409 ha−1 higher than CTW and SWI, respectively) and a higher B:C ratio in ZTW treatments than CTW and SWI. At the system level, MTR or DSR followed by ZTW had both superior crop yields and consistently higher gross margins (US $133 to 382 ha-1) than other practices. On the other hand, the SRI fb SWI system had no yield advantage and poorer economic performance than conventional practices. In all systems, the inclusion of a medium-duration rice hybrid resulted in higher rice and system yields. These results suggest that significant gains in profitability are possible with emerging TCE practices in rice-wheat systems, but alternatives such as the SRI and SWI will likely erode farmer incomes.