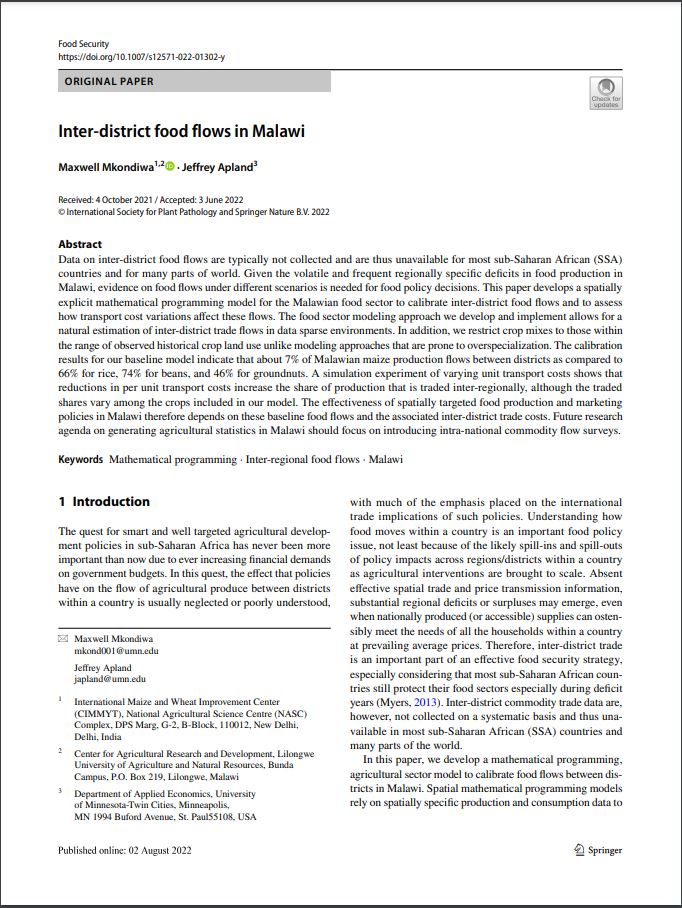 Data on inter-district food flows are typically not collected and are thus unavailable for most sub-Saharan African (SSA) countries and for many parts of world. Given the volatile and frequent regionally specific deficits in food production in Malawi, evidence on food flows under different scenarios is needed for food policy decisions. This paper develops a spatially explicit mathematical programming model for the Malawian food sector to calibrate inter-district food flows and to assess how transport cost variations affect these flows. The food sector modeling approach we develop and implement allows for a natural estimation of inter-district trade flows in data sparse environments. In addition, we restrict crop mixes to those within the range of observed historical crop land use unlike modeling approaches that are prone to overspecialization. The calibration results for our baseline model indicate that about 7% of Malawian maize production flows between districts as compared to 66% for rice, 74% for beans, and 46% for groundnuts. A simulation experiment of varying unit transport costs shows that reductions in per unit transport costs increase the share of production that is traded inter-regionally, although the traded shares vary among the crops included in our model. The effectiveness of spatially targeted food production and marketing policies in Malawi therefore depends on these baseline food flows and the associated inter-district trade costs. Future research agenda on generating agricultural statistics in Malawi should focus on introducing intra-national commodity flow surveys.