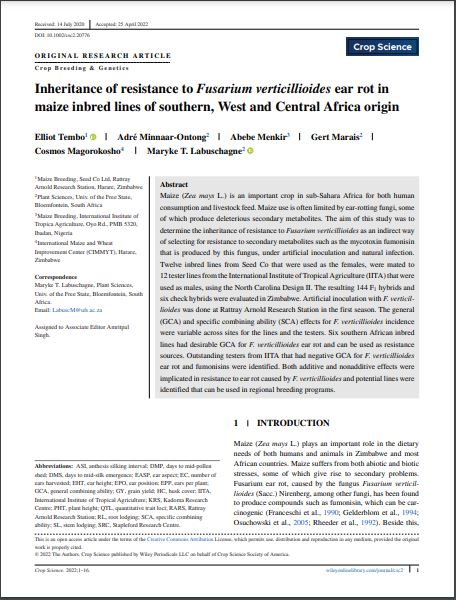 Maize (Zea mays L.) is an important crop in sub-Sahara Africa for both human consumption and livestock feed. Maize use is often limited by ear-rotting fungi, some of which produce deleterious secondary metabolites. The aim of this study was to determine the inheritance of resistance to Fusarium verticillioides as an indirect way of selecting for resistance to secondary metabolites such as the mycotoxin fumonisin that is produced by this fungus, under artificial inoculation and natural infection. Twelve inbred lines from Seed Co that were used as the females, were mated to 12 tester lines from the International Institute of Tropical Agriculture (IITA) that were used as males, using the North Carolina Design II. The resulting 144 F1 hybrids and six check hybrids were evaluated in Zimbabwe. Artificial inoculation with F. verticillioides was done at Rattray Arnold Research Station in the first season. The general (GCA) and specific combining ability (SCA) effects for F. verticillioides incidence were variable across sites for the lines and the testers. Six southern African inbred lines had desirable GCA for F. verticillioides ear rot and can be used as resistance sources. Outstanding testers from IITA that had negative GCA for F. verticillioides ear rot and fumonisins were identified. Both additive and nonadditive effects were implicated in resistance to ear rot caused by F. verticillioides and potential lines were identified that can be used in regional breeding programs.