Influence of residue type and method of placement on dynamics of decomposition and nitrogen release in maize-wheat-mungbean cropping on permanent raised beds: a litterbag study 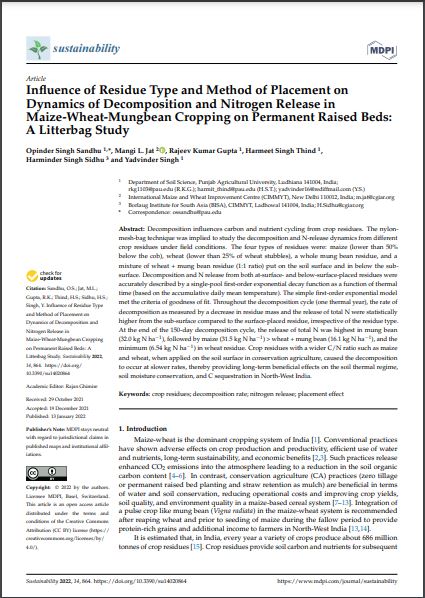 Decomposition influences carbon and nutrient cycling from crop residues. The nylon-mesh-bag technique was implied to study the decomposition and N-release dynamics from different crop residues under field conditions. The four types of residues were: maize (lower than 50% below the cob), wheat (lower than 25% of wheat stubbles), a whole mung bean residue, and a mixture of wheat + mung bean residue (1:1 ratio) put on the soil surface and in below the sub-surface. Decomposition and N release from both at-surface- and below-surface-placed residues were accurately described by a single-pool first-order exponential decay function as a function of thermal time (based on the accumulative daily mean temperature). The simple first-order exponential model met the criteria of goodness of fit. Throughout the decomposition cycle (one thermal year), the rate of decomposition as measured by a decrease in residue mass and the release of total N were statistically higher from the sub-surface compared to the surface-placed residue, irrespective of the residue type. At the end of the 150-day decomposition cycle, the release of total N was highest in mung bean (32.0 kg N ha−1), followed by maize (31.5 kg N ha−1) > wheat + mung bean (16.1 kg N ha−1), and the minimum (6.54 kg N ha−1) in wheat residue. Crop residues with a wider C/N ratio such as maize and wheat, when applied on the soil surface in conservation agriculture, caused the decomposition to occur at slower rates, thereby providing long-term beneficial effects on the soil thermal regime, soil moisture conservation, and C sequestration in North-West India.