Increase in irrigated wheat yield in north-west Mexico from 1960 to 2019: unravelling the negative relationship to minimum temperature 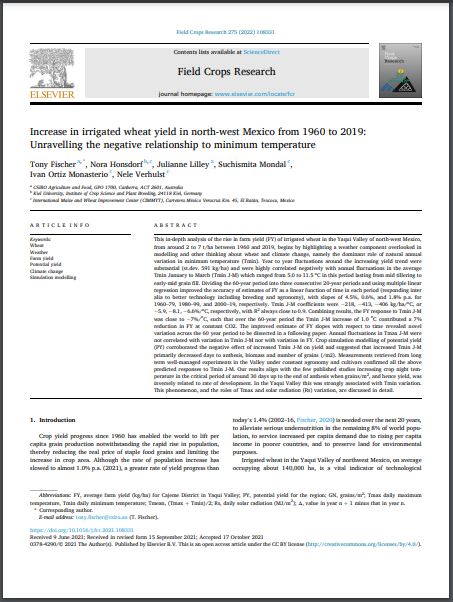 This in-depth analysis of the rise in farm yield (FY) of irrigated wheat in the Yaqui Valley of north-west Mexico, from around 2 to 7 t/ha between 1960 and 2019, begins by highlighting a weather component overlooked in modelling and other thinking about wheat and climate change, namely the dominant role of natural annual variation in minimum temperature (Tmin). Year to year fluctuations around the increasing yield trend were substantial (st.dev. 591 kg/ha) and were highly correlated negatively with annual fluctuations in the average Tmin January to March (Tmin J-M) which ranged from 5.0 to 11.5 oC in this period lasting from mid tillering to early-mid grain fill. Dividing the 60-year period into three consecutive 20-year periods and using multiple linear regression improved the accuracy of estimates of FY as a linear function of time in each period (responding inter alia to better technology including breeding and agronomy), with slopes of 4.5%, 0.6%, and 1.8% p.a. for 1960–79, 1980–99, and 2000–19, respectively. Tmin J-M coefficients were −218, −413, −406 kg/ha/oC, or −5.9, −8.1, −6.6%/oC, respectively, with R2 always close to 0.9. Combining results, the FY response to Tmin J-M was close to −7%/oC, such that over the 60-year period the Tmin J-M increase of 1.0 oC contributed a 7% reduction in FY at constant CO2. The improved estimate of FY slopes with respect to time revealed novel variation across the 60 year period to be dissected in a following paper. Annual fluctuations in Tmax J-M were not correlated with variation in Tmin J-M nor with variation in FY. Crop simulation modelling of potential yield (PY) corroborated the negative effect of increased Tmin J-M on yield and suggested that increased Tmin J-M primarily decreased days to anthesis, biomass and number of grains (/m2). Measurements retrieved from long term well-managed experiments in the Valley under constant agronomy, and cultivars confirmed all the above predicted responses to Tmin J-M. Our results align with the few published studies increasing crop night temperature in the critical period of around 30 days up to the end of anthesis when grains/m2, and hence yield, was inversely related to rate of development. In the Yaqui Valley this was strongly associated with Tmin variation. This phenomenon, and the roles of Tmax and solar radiation (Rs) variation, are discussed in detail.