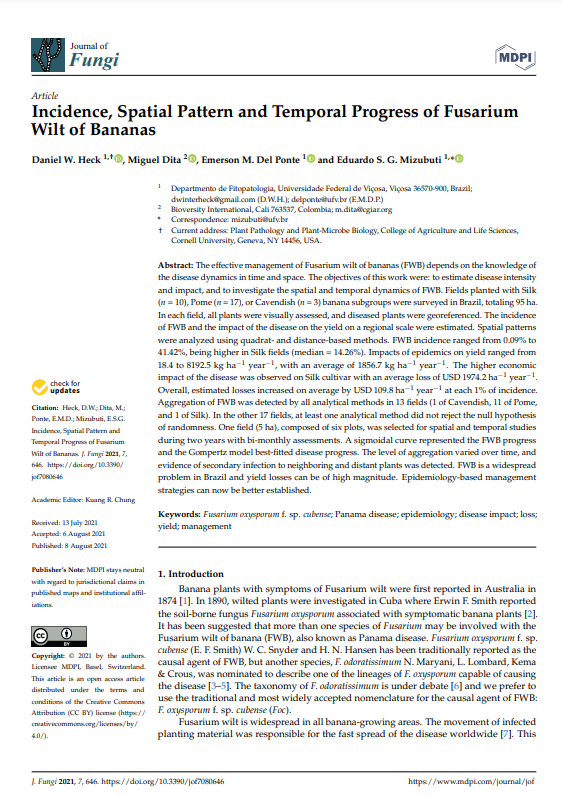 The effective management of Fusarium wilt of bananas (FWB) depends on the knowledge of the disease dynamics in time and space. The objectives of this work were: to estimate disease intensity and impact, and to investigate the spatial and temporal dynamics of FWB. Fields planted with Silk (n = 10), Pome (n = 17), or Cavendish (n = 3) banana subgroups were surveyed in Brazil, totaling 95 ha. In each field, all plants were visually assessed, and diseased plants were georeferenced.

The higher economic impact of the disease was observed on Silk cultivar with an average loss of USD 1974.2 ha−1 year−1. Overall, estimated losses increased on average by USD 109.8 ha−1 year−1 at each 1% of incidence. Aggregation of FWB was detected by all analytical methods in 13 fields (1 of Cavendish, 11 of Pome, and 1 of Silk). In the other 17 fields, at least one analytical method did not reject the null hypothesis of randomness. One field (5 ha), composed of six plots, was selected for spatial and temporal studies during two years with bi-monthly assessments. A sigmoidal curve represented the FWB progress and the Gompertz model best-fitted disease progress. The level of aggregation varied over time, and evidence of secondary infection to neighboring and distant plants was detected. FWB is a widespread problem in Brazil and yield losses can be of high magnitude. Epidemiology-based management strategies can now be better established.