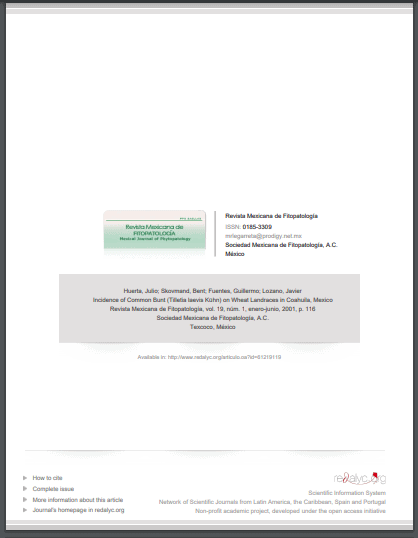 The first wheats introduced into Mexico were landraces from Spain. Some are still grown in parts of Mexico (3), but most were replaced by high yielding semidwarfs. Tilletia laevis has been reported in Mexico from 6 states (2), but there is no data on disease incidence. Surveys were conducted to confirm its presence in Coahuila State. For the surveys, heads of the dominant wheat landrace types were selected and whenever possible, a sample of each variant. Sites sampled in the Gral. Cepeda area in 1990 were: El Alamo, San Isidro, San Jose del Refugio, and Predio Dolores as well as Ejido Bella Vista Union in Arteaga County; in 1994: El Jaralito, Macuyo, Ojo de Agua, Ejido 2 de Abril and San Antonio in Gral. Cepeda, as well as Ejido Tierras Prietas and 18 de Marzo in Arteaga. One hundred heads at random in three different points of a field from 1 m2 were evaluated to determine the incidence level. In 1990, common bunt was found in all sampled sites with an incidence range of 40-60%. Bunted heads were found on all wheat types. In 1994, it was found only in 2 of the 8 sites in Gral. Cepeda. Incidence levels were 35-38% in El Jaralito, and 20-65% in Ejido 2 de Abril. Common bunt was also found in irrigated fields. Since farmers use their own seed without chemical treatment, the disease is continuously disseminated. Landrace cultivars often do not reach the market because they are planted by subsistence farmers in small areas; however, in some of these areas in Coahuila, losses can reach 100% because of the number of bunted heads, and their effect on quality. The fungus was identified as T. laevis according to the descriptions by Duran and Fischer (1).