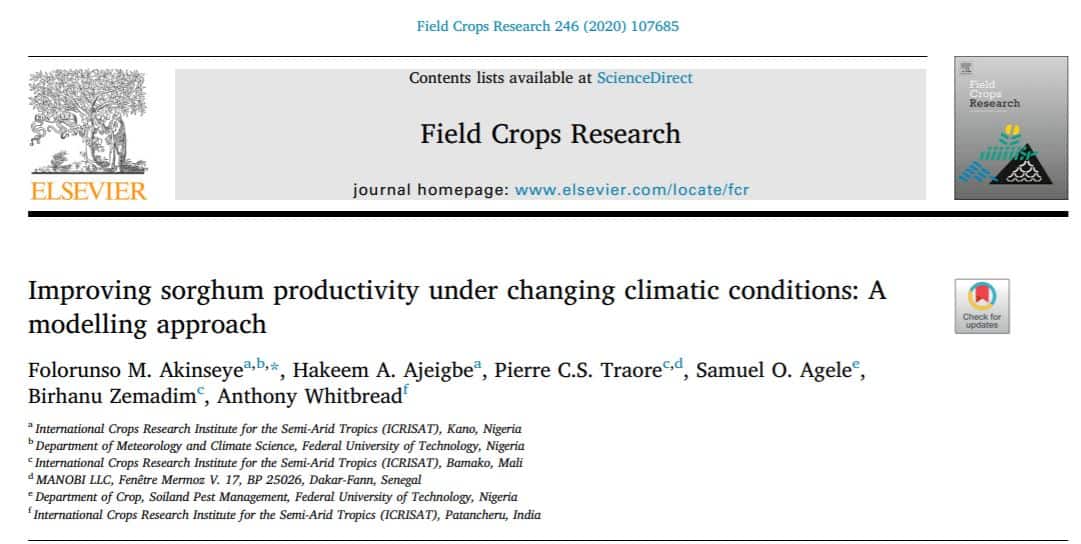 Climate variability and change will have far reaching consequences for smallholder farmers in sub-Saharan Africa, the majority of whom depend on agriculture for their livelihoods. Crop modelling can help inform the improvement of agricultural productivity under future climate. This study applies the Agricultural Production Systems sIMulator (APSIM) to assessing the impacts of projected climate change on two (early and medium maturing) sorghum varieties under different management practices. Results show high model accuracy with excellent agreement between simulated and observed values for crop phenology and leaf number per plant. The prediction of grain yield and total biomass of an early maturing variety was fair RMSEn (22.9 and 23.1%), while that of the medium maturing was highly accurate RMSEn (14.9 and 11.9%). Sensitivity analysis performed by changing the calibrated variables of key plant traits in the model, showed higher significant yield change by+or – 10 % changed in radiation use efficiency, (RUE), coefficient extinction (Coeff_ext) and Phyllocron (Phyllo) for early maturing variety while +or – 10 % changed in phyllochron and RUE showed a significant yield change for the medium maturing variety. Under climate change scenerios using RCP 8.5, the simulated yield for the early–maturing variety revealed high inter-annual variability and potential yield loss of 3.3% at Bamako and 1% at Kano in the near-future (2010–2039) compared to baseline (1980–2009). The midcentury (2040–2069) projected yield decline by 4.8% at Bamako and 6.2% at Kano compared to baseline (1980–2009). On the contrary, the medium maturing variety indicated significantly yield gain with high yielding potential in both climate regimes compared to the baseline period (1980–2009). The simulated grain yield increased by 7.2% at Bamako and 4.6% at Kano, in the near-future (2010–2039) while in the mid-century (2040–2069) projected yield increase of 12.3% and 2% at Bamako and Kano compared to baseline (1980–2009). Adaptation strategies under climate change for varying sowing dates in the near-future (2010–2039, indicated that June sowing had a higher positive yield gained over July and August sowing for early maturing variety; July sowing simulated positive gained by 5 -11% over June and August sowing for medium maturing variety in both locations. Similarly, under the mid-century (2040–2069), among the sowing dates and in both locations, June sowing indicates lowest negative yield change over July and August sowing for early maturing variety. However, for medium maturing variety, July sowing had the highest yield gain of 16% over June and August sowing at Bamako and June highest positive yield gained of 11.4% over July and August at Kano. Our study has, therefore, demonstrated the capacity of APSIM model as a tool for testing management, plant traits practices and adoption of improved variety for enhancing the adaptive capacity of smallholder farmers under climate change in the Sudanian zone of West Africa. This approach offers a promising option to design more resilient and productive farming systems for West Africa using the diverse sorghum germplasm available in the region.