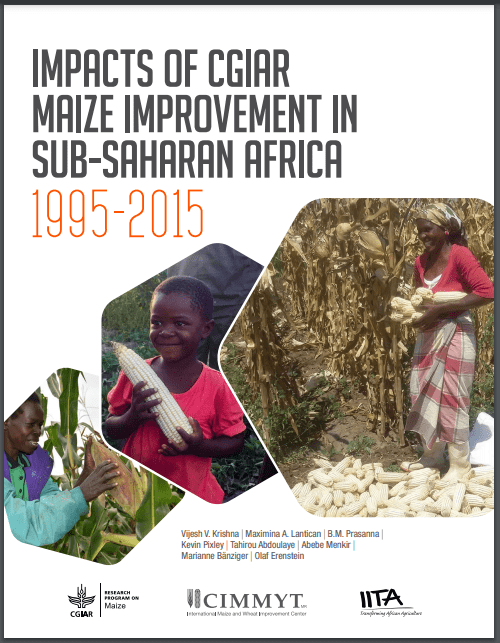 The adoption and impacts of improved maize varieties developed and deployed by CGIAR institutions in partnership with national agricultural research systems and the private sector are examined here for the period 1995-2015. The study focuses on 18 countries in sub-Saharan Africa (SSA) where maize is widely cultivated. We use data from an expert survey among maize breeders in CGIAR and partner institutions, and secondary sources and publications. Both maize area and maize productivity showed an upward trend in the target regions over the period studied. Regional differences, however, were observed with respect to the total number of maize varieties released during 1995-2015: <1 variety released per annum (p.a.) in five countries (Benin, Madagascar, Guinea, Cameroon, and Senegal), whereas 11-12 varieties were released p.a. in two countries (Kenya and Zambia). Of the 1,345 maize varieties released during this period, about 60% had CGIAR germplasm in their genetic background.

We classified the target countries with respect to the area under maize cultivation into ‘large producers’ (a group of eight countries averaging >1 million ha of maize per year during 1995-2015) and ‘small producers’ (a group of ten countries with <1 million ha). The share of released maize varieties containing CGIAR germplasm was found to be similar across groups. However, in the large producer group, several varieties were developed as crosses of CGIAR and non-CGIAR germplasm (24% of all released varieties, compared to 10% in the small producer group); this is probably associated with a more active private seed sector and stronger domestic breeding capacity among the large producer group of countries. In both large and small producers, there was a pronounced increase in the rate of annual varietal releases with a CGIAR relationship. The pace of official release of CGIAR-related improved varieties was faster than that of non-CGIAR varieties. Especially during the last five years of the study (i.e., 2011-2015), the number of released varieties with a CGIAR relationship was significantly larger (n = 304) than the number of released non-CGIAR varieties (n = 60). This pattern may be explained by the stepping-up of CGIAR breeding activities and the stronger networks established in the region since the mid-1990s. New types of germplasm were released that were resistant to more virulent diseases—particularly maize streak virus and gray leaf spot—and that were tolerant to drought and low soil fertility. The share of CGIARrelated maize varieties was substantial (87%) in countries with a low varietal release intensity (i.e., a large maize area per release p.a.) compared to countries with a high intensity (i.e., a small maize area per release p.a.) (59%).

In addition to a new series of elite open-pollinated varieties (OPVs), the breeding efforts by CGIAR and partnering institutions also produced a much wider range of elite hybrids that were submitted for registration and subsequent commercialization by an increasing number of small seed companies. Most maize varieties released in SSA during 1995-2015 were hybrids (73%). We found that the seed type (hybrids vs. OPVs) and CGIAR involvement in varietal development were strongly associated. Most OPVs, which generally have less expensive seed than hybrids, had a CGIAR relationship (84%). Hybrids accounted for 65% of all CGIAR-related releases and 88% of non-CGIAR releases.